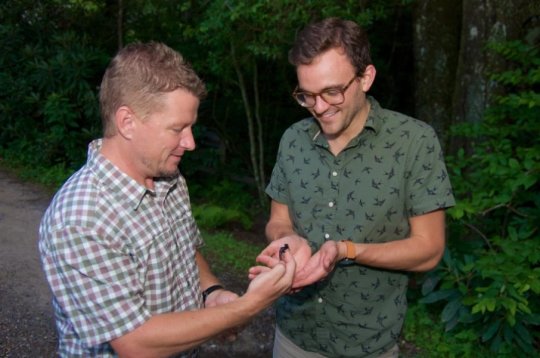 The plethora of salamanders living in the southern Appalachian Mountains might be in less danger from the effects of global warming than previously believed, according to new research published Wednesday in Science Advances.

The global hotspot for these fascinating amphibians is home to 10 percent of salamander diversity, a staggering figure that is rivaled nowhere else on Earth. But current predictions indicate that 70 to 85 percent of this moist and humid habitat will become unsuitable for the survival of salamanders by 2080 due to rising temperatures caused by climate change.

However, research by Clemson University scientists Eric Riddell and Michael Sears suggests that previous studies might have overestimated the extinction risk by largely ignoring the capability of salamanders to alter their behavior and physiology. Riddell and Sears project that plasticity — an individual’s capacity to change how it responds to the environment — will reduce extinction risk by up to 72 percent, especially in the core ranges.

“When scientists make predictions about extinction, we often have to work with what we have. This means that we use Big Data and advanced statistical software to understand what might happen in the future,” said Riddell, who recently received his Ph.D. in biological sciences at Clemson and is now a postdoctoral researcher in the Museum of Vertebrate Zoology at the University of California, Berkeley. “But our research has shown that salamanders have some tricks up their sleeves that are only apparent upon making direct observations in nature and in the laboratory.”

In their paper titled “Plasticity reveals hidden resistance to extinction under climate change in the global hotspot of salamander diversity,” Riddell and Sears report that salamanders exhibit a remarkable capacity to respond to stressful temperatures. When the scientists used these responses to predict extinction risk, they found that the overall salamander population is probably in better shape than feared.

“This is one of the first papers that has exclusively looked at plasticity in this sense. We’re telling you that our new predictions are nowhere near as dire as earlier predictions. In this part of the world, this is a particularly big deal,” said Sears, an associate professor in the department of biological sciences at Clemson University. “We can now say more accurately what might occur if climatic conditions continue to deteriorate.”

During a recent visit to the mountains near Highlands, North Carolina, Riddell and Sears searched for salamanders alongside murky paths lined with dripping trees and furry moss. It was near dusk and the mostly nocturnal species was just beginning to stir. But the scientists had no trouble locating several dozen of the lizard-like amphibians. No one really knows how many salamanders reside in the southern Appalachians. However, it is estimated that the salamanders inhabiting just a square mile of forest would have a combined biomass of 2,500 to 5,000 pounds — which is made even more impressive when you consider that many salamanders weigh about as much as a teaspoon of sugar.

“On the nights when I was surveying for salamanders, I could look down and find them sitting on top of my boots. I had to pay special attention to every step I took,” said Riddell, who conducted onsite and laboratory research during his five years under Sears’ mentorship. “Some of our best estimates suggest that salamanders outweigh all other vertebrates in the forest. If you put all the bears on one side of a scale and all the salamanders on the other, the salamanders would weigh more. Most people don’t realize how abundant salamanders are because people don’t do much hiking in the dark.”

Salamanders eat tons and tons of insects, making them a fundamental conduit of nutrient and energy flow throughout the forested mountains. Riddell and Sears studied seven species within the Plethodon jordani complex of salamanders, some of the most abundant species in the southern Appalachians. These salamanders are lungless and absorb oxygen through their skin, which they do most effectively when their skin is moist. This is one of the main reasons that the evaporative effects of global warming are an increasing threat to their survival.

“Salamanders have been in the region for millions of years, evens tens of millions. Yet, detailed genetic studies of geographic variation suggest that they have not moved around very much,” said David Wake, curator of the Museum of Vertebrate Zoology at the University of California, Berkeley. “During the past 2 million years, the southern Appalachians have experienced some dramatic incidents of climate change. So, how did the salamanders handle it? And how will they handle the accelerated climate change that most scientists accept as a near certainty?”

Wake said that Riddell and Sears have opened a new perspective on this problem, showing that lungless salamanders like Plethodon jordani have considerable acclimation ability.

“This suggests to me that these organisms hunker down and essentially shelter in place in the face of changing climates,” said Wake, who is one of one of the world’s leading experts on salamander diversity. “In short, they are able to adjust their physiology much more than we previously thought, and this perhaps accounts for much of their ability to deal with climate change — not by running away, but by using their abilities to adjust through time.”

Materials provided by Clemson University. Note: Content may be edited for style and length.