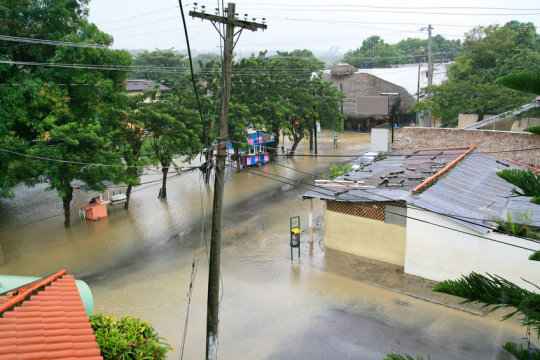 Published today in Environmental Research Letters, a study led by the UK National Oceanographic Centre (NOC) found flooding from rising sea levels could cost $14 trillion worldwide annually by 2100, if the target of holding global temperatures below 2ºC above pre-industrial levels is missed.

The researchers also found that upper-middle income countries such as China would see the largest increase in flood costs, whereas the highest income countries would suffer the least, thanks to existing high levels of protection infrastructure.

Dr Svetlana Jevrejeva, from the NOC, is the study’s lead author. She said: “More than 600 million people live in low-elevation coastal areas, less than 10 meters above sea level. In a warming climate, global sea level will rise due to melting of land-based glaciers and ice sheets, and from the thermal expansion of ocean waters. So, sea level rise is one of the most damaging aspects of our warming climate.”

Sea level projections exist for emissions scenarios and socio-economic scenarios. However, there are no scenarios covering limiting warming below the 2°C and 1.5°C targets during the entire 21st century and beyond.

The study team explored the pace and consequences of global and regional sea level rise with restricted warming of 1.5 ºC and 2 ºC, and compared them to sea level projections with unmitigated warming following emissions scenario Representative Concentration Pathway (RCP) 8.5.

“These extreme sea levels will have a negative effect on the economies of developing coastal nations, and the habitability of low-lying coastlines,” said Dr Jevrejeva. “Small, low-lying island nations such as the Maldives will be very easily affected, and the pressures on their natural resources and environmental will become even greater.

Materials provided by IOP Publishing. Note: Content may be edited for style and length.