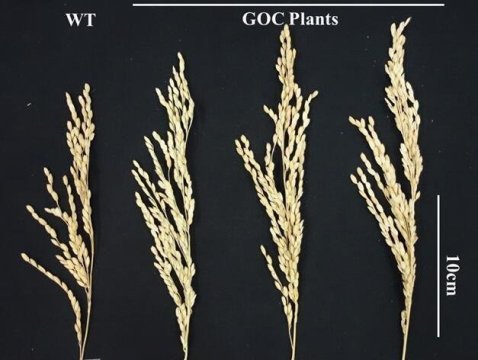 A new bioengineering approach for boosting photosynthesis in rice plants could increase grain yield by up to 27%, according to a study publishing January 10 in the journal Molecular Plant. The approach, called GOC bypass, enriches plant cells with CO2 that would otherwise be lost through a metabolic process called photorespiration. The genetically engineered plants were greener and larger and showed increased photosynthetic efficiency and productivity under field conditions, with particular advantages in bright light.

“Food shortage related to world population growth will be a serious problem our planet will have to face,” says senior study author Xin-Xiang Peng of South China Agricultural University in Guangzhou, China. “Our study could have a major impact on this problem by significantly increasing rice yield, especially for areas with bright light.”

Bioengineering improvement of rice, a staple food crop worldwide, has high practical importance, particularly in light of the need for increased crop productivity due to world population growth and the reduction of cultivable soils. But increases in yield for rice and several other major crops have been sparse in recent years, and crop yield seems to be reaching a ceiling of maximal potential.

Over the past few years, three photorespiratory bypasses have been introduced into plants, and two of these led to observable increases in photosynthesis and biomass yield. But most of the experiments were carried out using the model organism Arabidopsis, and the increases have typically been observed under environment-controlled, low-light, and short-day conditions. “To the best of our knowledge, our study is the first that tested photorespiration bypass in rice,” says co-author Zheng-Hui He of San Francisco State University.

In the new study, the researchers developed a strategy to essentially divert CO2 from photorespiration to photosynthesis. They converted a molecule called glycolate, which is produced via photorespiration, to CO2 using three rice enzymes: glycolate oxidase, oxalate oxidase, and catalase. To deploy GOC bypass, which was named for the three enzymes, the researchers introduced genes encoding the enzymes into rice chloroplasts — organelles where photosynthesis takes place in plant cells.

As a result, the photorespiratory rate was suppressed by 18%-31% compared to normal, and the net photosynthetic rate increased by 15%-22%, primarily due to higher concentrations of cellular CO2 used for photosynthesis. Compared to plants that were not genetically engineered, the GOC plants were consistently greener and larger, with an above-ground dry weight that was 14%-35% higher. Moreover, starch grains grew in size by 100% and increased in number per cell by 37%. In the spring seeding season, grain yield improved by 7% to 27%.

Moving forward, the researchers plan to optimize the performance of the engineered plants in the field by putting the same metabolic bypass in other rice varieties. They would also like to apply the same approach to other crop plants such potatoes.

“Our engineered plants could be deployed in fields at a larger scale after further evaluations by independent researchers and government agencies,” Peng says. “Although we don’t expect this approach would affect the taste of these plants, both the nutritional quality and taste are yet to be comprehensively evaluated by independent labs and governmental agencies.”

This work was supported by the National Natural Science Foundation of China and Science and Technology Project of Guangzhou City.