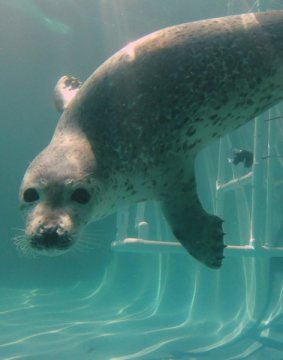 Marine mammals are particularly sensitive to noise pollution because they rely on sound for so many essential functions, including communication, navigation, finding food, and avoiding predators. An expert panel has now published a comprehensive assessment of the available science on how noise exposure affects hearing in marine mammals, providing scientific recommendations for noise exposure criteria that could have far-reaching regulatory implications.

Published March 12 in Aquatic Mammals, the paper is a major revision of the first such assessment, published in 2007 in the same journal. Both efforts were led by Brandon Southall, a research associate at the Institute of Marine Sciences at UC Santa Cruz and senior scientist at Southall Environmental Associates.

“One of the things we did in 2007 was to identify major gaps in our knowledge, and we now have considerably more data. We thought there was enough new science to reconvene the panel and revisit these issues,” said Southall, who served as director of NOAA’s Ocean Acoustics Program from 2004 to 2009.

Concern about the potential for ocean noise to cause hearing damage or behavioral changes in marine mammals began to mount in the 1990s, focusing initially on activities related to the oil and gas industry. In the early 2000s, the association of sonar with mass strandings of deep-diving whales became another focus of concern. Shipping and construction activities are other important sources of ocean noise pollution.

Loud noises can cause temporary or permanent hearing loss, can mask other sounds, and can disturb animals in various ways. The new paper focuses on direct effects of noise pollution on hearing in marine mammals. Separate papers addressing behavioral effects and the acoustics of different sound sources will be published later this year.

“Noise-induced hearing loss occurs in animals the same way it does in humans. You can have a short-term change in response to exposure to loud noise, and you can also have long-term changes, usually as a result of repeated insults,” said coauthor Colleen Reichmuth, a research scientist who leads the Pinniped Cognition and Sensory Systems Laboratory at UC Santa Cruz.

Because animals vary in their sensitivities to different types and frequencies of sound, the panel categorized marine mammal species into groups based on what was known about their hearing. The new paper includes all living species of marine mammals.

“The diversity of species is such that a one-size-fits-all approach isn’t going to work,” said coauthor Darlene Ketten, a neuro-anatomist with joint appointments at Woods Hole Oceanographic Institute and Boston University’s Hearing Research Center. “We need to understand how to avoid harm, and the aim is to provide guidelines to say, if this or that species is in your area, here’s what you need to avoid.”

Over the past decade, the number of scientific studies on hearing in marine mammals has grown rapidly, enabling the panel to refine and improve its groupings and assessments. Accompanying the paper is a set of appendices compiling all the relevant information for 129 species of marine mammals.

“We did a comprehensive review, species by species, for all living marine mammals,” said Reichmuth, who led the work on the appendices. “We pulled together the available knowledge covering all aspects of hearing, sound sensitivity, anatomy, and sound production. That’s the scientific basis for the species groupings used in the noise exposure criteria.”

“The appendices are a really important resource that does not exist anywhere else,” Southall said. “The 2007 paper was the most impactful single paper I’ve ever published — it’s been cited in the literature more times than all my other papers combined — and I expect this new paper will have a similar impact.”

The 2007 paper covered only those species under the jurisdiction of the National Marine Fisheries Service (NOAA Fisheries). NOAA Fisheries issued U.S. regulatory guidance in 2016 and 2018 based on the 2007 paper and a 2016 Navy technical report by James Finneran, a researcher at the U.S. Navy Marine Mammal Program in San Diego and a coauthor of both papers.

In addition to covering all marine mammals for the first time, the new paper also addresses the effects of both airborne and underwater noise on amphibious species in coastal environments, such as sea lions. According to Southall, publishing the new noise exposure criteria along with a comprehensive synthesis of current knowledge in a peer-reviewed journal is a major step forward.

“There are regulatory agencies around the world that are thirsting for this kind of guidance,” Southall said. “There are still holes where we need more data, but we’ve made some big strides.”

Research on seals, sea lions, and sea otters at the UCSC Pinniped Lab now run by Reichmuth has provided much of the new data on hearing in amphibious marine mammals. Working with trained animals at UCSC’s Long Marine Laboratory, Reichmuth’s team is able to conduct controlled experiments and perform hearing tests similar to those used to study human hearing.

Finneran’s program in San Diego and coauthor Paul Nachtigall’s program at the University of Hawaii have provided much of the data for dolphins and other cetaceans.

But some marine mammals, such as baleen whales and other large whales, simply can’t be held in a controlled environment where researchers could conduct hearing tests. That’s where Ketten’s research comes in. Ketten uses biomedical imaging techniques, including CT and MRI, to study the auditory systems of a wide range of species.

“Modeling an animal’s hearing based on the anatomy of its auditory system is a very well-established technique that can be applied to baleen whales,” Ketten explained. “We also do this modeling for the species that we can test in captivity, and that enables us to hone the models and make sure they’re accurate. There has been a lot of resistance to modeling, but it’s the only way to study hearing in some of the species with the greatest potential for harm from human sounds.”

Southall said he regularly hears from people around the world looking for guidance on regulating noise production by activities ranging from wind farm construction to seismic surveys. “This paper has significant international implications for regulation of noise in the ocean,” he said.