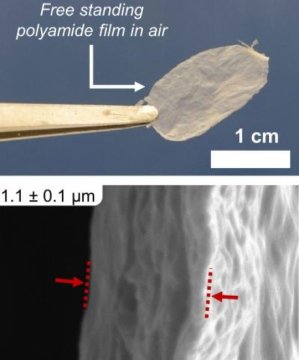 Currently, more than 300 million people around the world rely on desalinated water for part or all of their daily needs. That demand will only grow with larger populations and improved standards of living around the world.

Accessing the oceans for drinking water, however, requires desalination technologies that are complicated and expensive. The most commonly used technology for desalination is reverse osmosis (RO), a process in which seawater is forced through a membrane capable of removing salts and other small molecule contaminants. While the use of RO continues to rise around the world, many of its drawbacks, which include high energy consumption and a propensity for membranes to foul, continue to plague the industry.

In the current issue of Science, researchers at the University of Connecticut offer a new approach to membrane production that makes us rethink how to design and use RO membranes for desalination.

Using an additive manufacturing approach employing electrospraying, UConn scientists were able to create ultra-thin, ultra-smooth polyamide membranes that are less prone to fouling and may require less power to move water through them.

“Today’s membranes for reverse osmosis are not made in a way that allows their properties to be controlled,” says Jeffrey McCutcheon, associate professor of chemical & biomolecular engineering and the paper’s corresponding author. “Our approach uses an ‘additive’ technique that allows for control of a membrane’s fundamental properties such as thickness and roughness, which is currently impossible using conventional methods.”

Conventional approaches to making RO membranes have not changed in nearly 40 years. The traditional approach to making these membranes is known as interfacial polymerization. This method relies on a self-terminating reaction between an aqueous phase amine and an organic phase acid chloride monomer. The resulting polyamide films — exceedingly thin, highly selective, and permeable to water — became the gold standard membrane for RO. However, as the field has advanced, the need to better control this reaction to allow for membranes of varying thickness and roughness to optimize water flow and reduce fouling has become more pressing.

UConn’s method provides a superior level of control over the thickness and roughness of the polyamide membrane. Typical polyamide membranes have a thickness between 100 and 200 nanometers (nm) that cannot be controlled. UConn’s electrospray method allows for the controlled creation of membranes as thin as 15 nm and the capacity to control membrane thickness in 4 nm increments, a level of specificity unseen before in this area. Likewise, typical RO membranes have a roughness of over 80 nm. UConn researchers were able to create membranes with roughness as low as 2nm. In spite of these unique properties, the membrane continued to exhibit high salt rejection and were robust when operated under pressures typical of RO.

“Our printing approach to making polyamide membranes has the additional benefit of being scalable,” McCutcheon says. “Much like electrospinning has seen dramatic improvements in roll-to-roll processing, electrospraying can be scaled with relative ease.”

The authors of the study also conclude that this type of manufacturing could save on chemical consumption as traditional chemical baths are not needed as part of the membrane fabrication process.

“In the lab, we use 95% less chemical volume making membranes by printing when compared to conventional interfacial polymerization,” says McCutcheon, the UConn School of Engineering’s Al Geib Professor of Environmental Engineering Research and Education. “These benefits would be magnified in large-scale membrane manufacturing and make the process more “green” than it has been for the past 40 years”

This innovative new approach is not limited to desalination and could lead to better membranes for other separation processes.

“This method is not limited to making membranes for RO.” says McCutcheon, who in addition to his academic duties also serves as the executive director of the Fraunhofer USA Center for Energy Innovation at UConn, which is focused on developing new applied membrane technologies. “In fact, we hope that this method will enable new materials to be considered for a myriad of membrane separation processes, perhaps in processes where those materials were not, or could not, be used before.”

Materials provided by University of Connecticut. Note: Content may be edited for style and length.