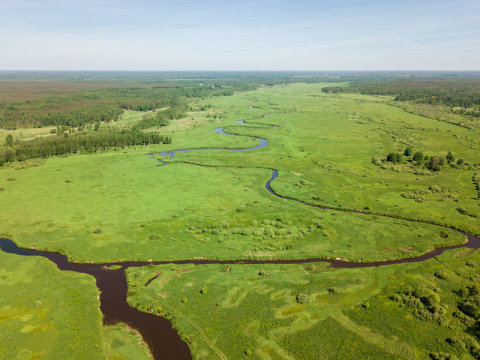 There are more than 1 million river basins carved into the topography of the United States, each collecting rainwater to feed the rivers that cut through them. Some basins are as small as individual streams, while others span nearly half the continent, encompassing, for instance, the whole of the Mississippi river network.

River basins also vary in shape, which, as MIT scientists now report, is heavily influenced by the climate in which they form. The team found that in dry regions of the country, river basins take on a long and thin contour, regardless of their size. In more humid environments, river basins vary: Larger basins, on the scale of hundreds of kilometers, are long and thin, while smaller basins, spanning a few kilometers, are noticeably short and squat.

The difference, they found, boils down to the local availability of groundwater. In general, river basins are shaped by rainfall, which erodes the land as it drains down into a river or stream. In humid environments, a large fraction of rainfall seeps into the Earth, creating a water table, or a local reservoir of groundwater. When that groundwater seeps back out, it can also cut into a basin, further eroding and shifting its shape.

The researchers found that smaller basins that are formed in humid climates are heavily shaped by the local groundwater, which acts to carve out shorter, wider basins. For much larger basins that cover a more expansive geographic area, the availability of groundwater may be less consistent, and therefore plays less of a role in a basin’s shape.

The results, published today in the Proceedings of the Royal Society A, may help researchers identify ancient climates in which basins originally formed, both on Earth and beyond.

“This is the first time in which the shape of river networks has been related to climate,” says Daniel Rothman, professor of geophysics in MIT’s Department of Earth, Atmospheric, and Planetary Sciences, and co-director of MIT’s Lorentz Center. “Work like this may help scientists infer the kind of climate that was present when river networks were initially incised.”

In previous work published in 2012, Rothman and his colleagues identified a surprisingly universal connection between groundwater and the way in which rivers split, or branch. The team formulated a mathematical model to discover that, in regions where erosion is caused mainly by the seepage of groundwater, rivers branch at a common angle of 72 degrees. In follow-up work, they found that this common branching angle held up in humid environments, but in dryer regions, rivers tended to split at narrower angles of around 45 degrees.

“River networks form these beautiful branched structures, and previous work has helped explain the angles at which rivers join together to form these structures,” Yi says. “But each river is also intimately connected to a basin, which is the area of land that it drains rainwater from. So we suspected that the shapes of bains could contain some similar geometric curiosities.”

The team set out to find a similar universal pattern in the shape of river basins. To do this, they accessed datasets containing detailed maps of all the rivers and basins in the contiguous United States — more than 1 million in total — along with datasets containing two climatic parameters for every region in the country: precipitation rate and potential evapotranspiration, or the rate at which surface water would evaporate if it were present.

The datasets contained estimates of each river basin’s area, which the researchers combined with the length of each basin’s river to calculate a basin’s width. They then noted for each basin, an aspect ratio — the ratio of a basin’s length to width, which gives an idea of a basin’s overall shape. They also calculated each basin’s aridity index — the ratio between the regional precipitation rate and potential evapotranspiration — which indicates whether the basin resides in a humid or dry environment.

When they plotted each basin’s aspect ratio against the local aridity index, they found an interesting trend: Basins in dry climates, regardless of size, took on long, thin shapes, as did large basins in humid environments. However, smaller basins in similarly humid regions looked significantly wider and shorter.

“We found that arid basins roughly kept their shape with size, but humid basins got narrower as they grew larger,” Yi says. “That confused us for a long time.”

Answers in the ground

The researchers suspected that the dichotomy between dry- and humid-type shapes stemmed from their previous observations of branching rivers: In humid climates, groundwater plays an additional role to rainfall in creating wider branches of a rivers, compared with in drier climates. They reasoned that groundwater may play a similar role in widening a river’s basin.

To check their hypothesis, they looked at characteristics of each basin’s geology, such as the types of rock and soil underlying the basin, and the depth to which groundwater might penetrate. In general, they found that in drier climates, any rainwater that seeped into the ground would dribble deep below the surface, like liquid running through a Brillo pad. Any resulting reservoir, or water table, would be too deep for groundwater to come back up to the surface.

In contrast, in more humid environments, water is more likely to saturate the soil, like tap water soaking a damp sponge. In these climates, water would seep into the ground, creating large water tables close to the surface.

The team then computed the extent to which stream locations corresponded to locations where groundwater emerged. They found a greater correspondence where there was more groundwater seeping out around river basins in humid climates, versus in drier climates. This suggests that groundwater plays a bigger role in carving out humid basins, creating wider, more squat shapes, in contrast to the longer, thinner shapes of dry-climate river basins.

This groundwater effect may be especially pronounced at smaller, more local scales over several kilometers. At much larger scales, spanning nearly half the continent, the group found river basins, even in humid environments, took on long, thin contours, which may be attributed to the fact that, over such a vast area, the interaction between groundwater and the large-scale structure of river networks is relatively weak.

This research was supported, in part, by the U.S. Department of Energy Office of Science, Office of Basic Energy Sciences, Chemical Sciences, Geosciences and Biosciences Division.