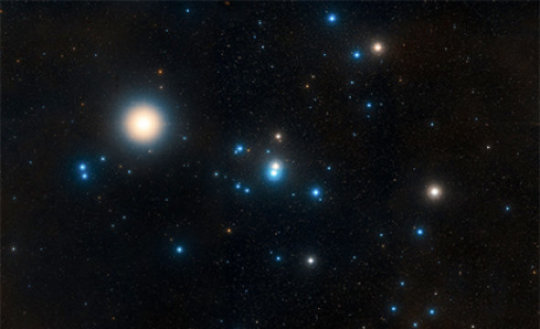 In the course of their life, open star clusters continuously lose stars to their surroundings. The resulting swath of tidal tails provides a glimpse into the evolution and dissolution of a star cluster. Thus far only tidal tails of massive globular clusters and dwarf galaxies have been discovered in the Milky Way system. In open clusters, this phenomenon existed only in theory. Researchers at Heidelberg University have now finally verified the existence of such a tidal tail in the star cluster closest to the Sun, the Hyades. An analysis of measurements from the Gaia satellite led to the discovery.

Open star clusters are collections of approximately 100 to a few thousand stars that emerge almost simultaneously from a collapsing gas cloud and move through space at about the same speed. Owing to a number of influences, however, they do begin to disperse after a few hundred million years. Among the factors working against the gravitationally bound stars is the tidal force of a galaxy, which pulls the stars out of the cluster. Tidal tails then form during the movement of the star cluster through the Milky Way. It is the beginning of the end of an open star cluster.

Together with researchers from the Max Planck Institute for Astronomy in Heidelberg, scientists from the Centre for Astronomy of Heidelberg University (ZAH) have detected this phenomenon for the first time in the Hyades, one of the older and best-studied open star clusters in the Milky Way system. They studied the data published in April 2018 from the Gaia satellite, which has been systematically mapping the heavens for five years. Rather than taking direct photographs, Gaia measures the stars’ motion and position.

From this data, the Heidelberg astronomers identified two tidal tails of the Hyades with a total of approximately 500 stars extending up to 650 light-years from the cluster. Dr Siegfried Röser of the Königstuhl State Observatory of the ZAH explains that one of the tails precedes the open star cluster and the other follows it. “Our discovery shows that it is possible to trace the trajectories of individual stars of the Milky Way back to their point of origin in a star cluster,” states Dr Röser. The astronomer believes that this marks the beginning of many significant discoveries in galactic astronomy. Apart from the Heidelberg astronomers, a team of researchers from Vienna also discovered the tidal tails of the Hyades.

The research was conducted under the auspices of The Milky Way System Collaborative Research Centre (CRC 881) at Heidelberg University, which is funded by the German Research Foundation.

Materials provided by University of Heidelberg. Note: Content may be edited for style and length.