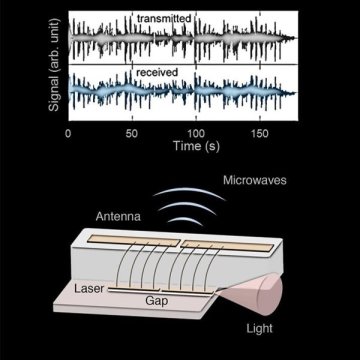 Researchers from the Harvard John A. Paulson School of Engineering and Applied Sciences transmitted a recording of Martin’s classic “Volare” wirelessly via a semiconductor laser — the first time a laser has been used as a radio frequency transmitter.

In a paper published in the Proceedings of the National Academy of Sciences, the researchers demonstrated a laser that can emit microwaves wirelessly, modulate them, and receive external radio frequency signals.

“The research opens the door to new types of hybrid electronic-photonic devices and is the first step toward ultra-high-speed Wi-Fi,” said Federico Capasso, the Robert L. Wallace Professor of Applied Physics and Vinton Hayes Senior Research Fellow in Electrical Engineering, at SEAS and senior author of the study.

This research builds on previous work from the Capasso Lab. In 2017, the researchers discovered that an infrared frequency comb in a quantum cascade laser could be used to generate terahertz frequencies, the submillimeter wavelengths of the electromagnetic spectrum that could move data hundreds of times faster than today’s wireless platforms. In 2018, the team found that quantum cascade laser frequency combs could also act as integrated transmitters or receivers to efficiently encode information.

Now, the researchers have figured out a way to extract and transmit wireless signals from laser frequency combs.

Unlike conventional lasers, which emit a single frequency of light, laser frequency combs emit multiple frequencies simultaneously, evenly spaced to resemble the teeth of a comb. In 2018, the researchers discovered that inside the laser, the different frequencies of light beat together to generate microwave radiation. The light inside the cavity of the laser caused electrons to oscillate at microwave frequencies — which are within the communications spectrum.

“If you want to use this device for Wi-Fi, you need to be able to put useful information in the microwave signals and extract that information from the device,” said Marco Piccardo, a postdoctoral fellow at SEAS and first author of the paper.

The first thing the new device needed to transmit microwave signals was an antenna. So, the researchers etched a gap into the top electrode of the device, creating a dipole antenna (like the rabbit ears on the top of an old TV). Next, they modulated the frequency comb to encode information on the microwave radiation created by the beating light of the comb. Then, using the antenna, the microwaves are radiated out from the device, containing the encoded information. The radio signal is received by a horn antenna, filtered and sent to a computer.

The researchers also demonstrated that the laser radio could receive signals. The team was able to remotely control the behavior of the laser using microwave signals from another device.

The Harvard Office of Technology Development has protected the intellectual property relating to this project and is exploring commercialization opportunities.