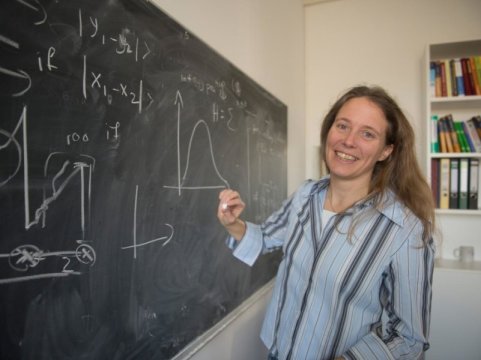 Physicists at the University of Bonn have succeeded in putting a superconducting gas into an exotic state. Their experiments allow new insights into the properties of the Higgs particle, but also into fundamental characteristics of superconductors. The publication, which is already available online, will soon appear in the journal Nature Physics.

For their experiments, scientists at the University of Bonn used a gas made of lithium atoms, which they cooled down significantly. At a certain temperature, the state of the gas changes abruptly: It becomes a superconductor that conducts a current without any resistance. Physicists also speak of a phase transition. A similar sudden change occurs with water when it freezes.

The lithium gas changes to a more orderly state at its phase transition. This includes the formation of so-called Cooper pairs, which are combinations of two atoms that behave like a single particle to the outside.

These pairs behave fundamentally differently from individual atoms: They move together and can do so without scattering on other atoms or pairs. This is the reason for the superconductivity. But what happens when you try to excite the pairs?

“We illuminated the gas with microwave radiation,” explains Prof. Dr. Michael Köhl from the Physics Institute at the University of Bonn. “This allowed us to create a state in which the pairs start to vibrate and the quality of the superconductivity therefore oscillated very quickly: One moment the gas was a good superconductor, the next a bad one.”

This common oscillation of the Cooper pairs corresponds to the Higgs boson discovered at the CERN Accelerator in 2013. As this state is very unstable, only a handful of working groups worldwide have succeeded in producing it.

The experiments allow an insight into certain physical properties of the Higgs boson. For example, the physicists hope that studies like these will enable them to better understand the decay of this extremely short-lived particle in the medium term.

But the experiments are also interesting for another reason: They show a way to switch superconductivity on and off very quickly. Superconductors normally try to remain in their conductive state for as long as possible. They can be dissuaded by heating, but this is a very slow process. The experiments show that in principle this can also be over a thousand times faster. This insight may open up completely new applications for superconductors.

The success of the Bonn scientists is also based on a successful cooperation between theory and experiment: “We theoretically predicted the phenomena,” explains Prof. Dr. Corinna Kollath from the Helmholtz-Institut für Strahlen- und Kernphysik at the University of Bonn. “During the experiments at the Physics Institute, Prof. Köhl and his colleagues knew exactly what to look for.”