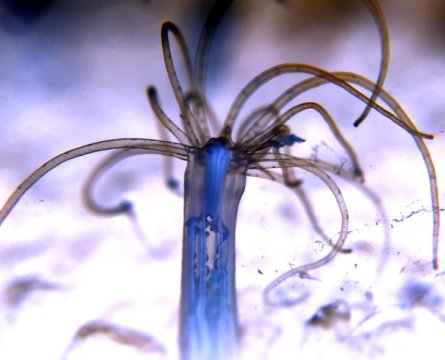 Researchers from the Stowers Institute for Medical Research have opened a window on another piece of evolutionary biology. They have found that Hox genes, which are key regulators of the way the bodies of bilaterally symmetrical animals form, also play a role in controlling the radially symmetric body plan of the starlet sea anemone, Nematostella vectensis.

These findings, published in the September 28, 2018, issue of Science, give researchers a better understanding of these genes’ ancestral function, and a grasp on an important step in evolutionary biology.

“The sea anemone offers us a window into the possible ancient past of Hox gene function,” says Stowers Investigator Matthew Gibson, Ph.D., who led the study.

The roles of Hox genes in bilaterian animals have been well established. These are animals that have a head-to-tail axis, have largely symmetrical left and right sides, and include everything from humans to dogs to fish to spiders. Hox genes control the identity of different segments of these animals as they develop, setting in motion the genetic programs that form various body structures such as limbs and organs. Segment identity depends on which Hox genes are expressed — or the Hox code — in that region of the developing organism.

Although Hox genes have been identified in the group of animals known as Cnidaria, which include radially symmetrical animals like sea anemones, jellyfish, and corals, their particular roles in cnidarian body plan regulation were previously unknown.

“We’ve never had functional evidence for where the Hox code originated and how it may have controlled development before the emergence of the bilaterians,” Gibson said. “By studying the function of Hox genes in a sea anemone we can begin to understand the possible role of these genes in our ancient common ancestor, some 600 million years in the past.”

To tackle this problem, the researchers disrupted the function of the Anthox1a, Anthrox8, Anthrox6a, and Gbx genes in body patterning of the sea anemone Nematostella vectensis. They did this in two ways — they disrupted the function of Hox genes through treatment with short hairpin RNAs, and also used CRISPR-Cas9, a gene editing system, to remove these Hox genes from the genome.

They found that the loss or disruption of Hox gene function led to striking defects in both segmentation of the body and tentacle patterning. The mutant sea anemones developed only two or three tentacles instead of the usual four. Some tentacles were enlarged and partially fused, and others were bifurcated.

“It’s entirely possible that the ancestral role of the Hox genes was to both drive segment formation and confer segment identity,” Gibson said. “In extant bilaterians, these functions may have separated such that Hox genes just control segment identity.”

“These findings uncover the existence of a Hox code in a developing cnidarian, providing evolutionary biologists with new insights into the process of Hox code evolution,” said Shuonan He, a predoctoral researcher at the Graduate School of the Stowers Institute for Medical Research and first author of the paper. “These genes already existed before the split of bilaterians and cnidarians from their common ancestor,” he said. “Now we can look at more cnidarian branches to test if these genes are employed in similar fashion.”

Gibson said that these findings also provide further evidence that evolution doesn’t necessarily make the gene code more complex. “There is a popular notion that the process of evolution increases sophistication and complexity inexorably upward, but we now know in many cases that’s not what happens at all,” he said. “Our ancient animal ancestors had complex biology regulated by the same types of genes that are present in humans today. They were just employed in a different way.”

The work was funded by the Stowers Institute for Medical Research.