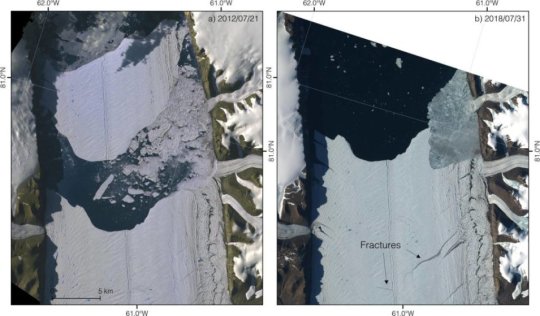 Cracks in the floating ice tongue of Petermann Glacier in the far northwest reaches of Greenland indicate the pending loss of another large iceberg. As glaciologists from the Alfred Wegener Institute, Helmholtz Centre for Polar and Marine Research (AWI) report in a new study, the glacier’s flow rate has increased by an average of 10 percent since the calving event in 2012, during which time new cracks have also formed — a quite natural process. However, the experts’ model simulations also show that, if these ice masses truly break off, Petermann Glacier’s flow rate will likely accelerate further and transport more ice out to sea, with corresponding effects on the global sea level. The study was recently released in the Journal of Geophysical Research: Earth Surface and is freely available.

Located in the outermost northwest corner of Greenland, Petermann Glacier is one of the most prominent glaciers in the region: partly because its catchment encompasses four percent of the Greenland Ice Sheet, and partly because it is one of only three glaciers in Greenland with a floating ice tongue. That tongue currently extends roughly 70 kilometres into Petermann Fjord. Cracks 12 kilometres above the previous glacier edge indicate that, in the near future, another major iceberg could calve from Petermann Glacier.

Glaciologists at the Alfred Wegener Institute, Helmholtz Centre for Polar and Marine Research (AWI) in Bremerhaven came to this conclusion after analysing satellite imagery of the glacier from the past ten years. “The satellite data shows that Petermann Glacier had a flow speed of roughly 1135 metres per year in the winter of 2016. That equates to an acceleration of about 10 percent in comparison to the winter of 2011, and we asked ourselves what was responsible for the increased speed,” explains AWI glaciologist and co-author Niklas Neckel.

Fjord sidewalls serve as stabilizing effect to the glacier

The researchers subsequently simulated the glacier’s observed ice transport in a computer model and were able to confirm that the loss of a large iceberg in August 2012 is what triggered the acceleration. “On their way to the sea, the glacier’s ice masses rub along the rock walls that enclose the fjord to the left and right. If a major iceberg breaks away from the end of the glacier’s tongue, it will reduce the tongue’s overall length, and with it, the route along which the ice masses scrape against the stone. This in turn limits the walls’ braking effect, so that the glacier begins flowing faster,” explains AWI ice modeller and first author Martin Rückamp.

The computer model predicts that a new calving event would produce a similar acceleration. “We can’t predict when Petermann Glacier will calve again, or whether a calving event would actually calve along the cracks we identified in the ice tongue,” says Rückamp. “But we can safely assume that, if it does come to a new calving event, the tongue will retreat considerably, and the rock’s stabilizing effect will further decline.”

An effect of climate change?

To what extent Petermann Glacier’s accelerated ice transport is due to various global warming impacts is a question that the experts haven’t yet investigated in depth. “We now know that the loss of icebergs increases the glacier’s flow rate. In addition, we’ve observed that calving events on Petermann Glacier are happening more frequently. But the question of whether these changes are due to the warming atmosphere over Greenland, or to warmer seawater, isn’t an aspect that we could investigate using the satellite data,” says Niklas Neckel. Nevertheless, the experts consider the acceleration of Petermann Glacier to be an important signal. Unlike the glaciers in southeast and southwest Greenland, those in the island’s northern reaches have remained largely stable; now that appears to have changed.

Since 2002, the Greenland Ice Sheet and the island’s glaciers have lost an average of 286 billion tonnes of ice per year. This loss of mass is above all due to intensified surface melting in the summer. Iceberg calving has also increased: Greenland’s glaciers are now losing a forth more ice in the form of calving events than in the comparison period (1960 to 1990). Potential causes include warmer ocean currents, which melt the glaciers’ floating tongues from below; and meltwater, which percolate into cracks and crevasses until it reaches the glacier bed, where it acts like a lubricant, causing ice flows to accelerate. The total annual global sea-level rise is ca. 3.3 millimetres, of which the loss of ice on Greenland is currently contributing ca. 0.7 millimetres.