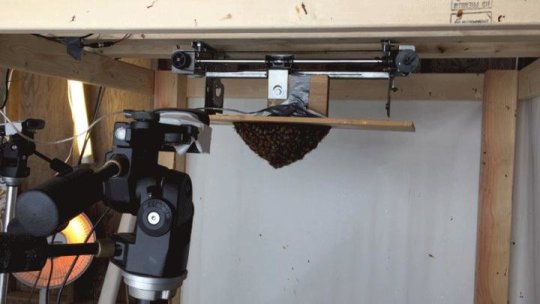 A team of Harvard University researchers spent months shaking and rattling swarms of thousands of honey bees to better understand how bees collectively collaborate to stabilize structures in the presence of external loads.

The research is published in Nature Physics.

“Our study shows how living systems harness physics to solve complex problems on scales much larger than the individual,” said L. Mahadevan, the Lola England de Valpine Professor of Applied Mathematics at the Harvard John A. Paulson School of Engineering and Applied Sciences (SEAS), Professor of Organismic and Evolutionary Biology (OEB), and Professor of Physics and senior author of the study. “We demonstrated that bees can harness the physicality of the environment solve a global mechanical stability problem by using local sensing and action”

This research follows earlier work by the group that showed how bees can also collectively maintain the temperature of a cluster using local sensing and actuation to prevent overheating or overcooling.

Bee swarms form when a queen bee strikes out with a large group of worker bees to form a new colony. While scouts look for a new nest location, the colony forms a living, breathing structure, made of their own bodies, on a nearby tree branch. These clusters maintain their structure and stability for days in the presence of wind, rain and other external loads.

“The primary question of our research was, given that individual bees can likely only sense their interactions with their neighbors, how do they make changes to maintain the overall structure of the cluster?” said Orit Peleg, a former postdoctoral fellow at SEAS and co-first author of the paper.

Peleg is now an Assistant Professor of Computer Science at the University of Colorado — Boulder.

The researchers built a bee swarm by attaching a caged queen bee to a moveable board and waiting for worker bees to cluster around her. Once the cluster was formed, the researchers simulated wind by shaking the board horizontally and vertically.

The bees know which way to move because they respond to the local changes from their neighbors.

“Individual bees can tell the direction of the strain based on their connection to their neighbors,” said Jacob Peters, who recently defended his PhD in OEB, and co-first author of the paper. “Because the strains on the swarm are highest at the top of the swarm, where its connected to the branch — or in this case, the board — they know to move up. All the bees move up together because they’re influenced by this gradient, so it leads to a coordinated movement.”

When the cluster flattens during horizontal shaking, load sharing by individual bees increases but the colony overall is more stable — similar to crouching when the ground is shaking. The researchers were able to mimic this behavior in a computer simulation by imposing rules at the local level.

The researchers also found that when the bees were shaken vertically, the cluster did not adapt its shape because the local variations in deformations were smaller.

This research could have broader implications for how we think of control algorithms and collaborative machines.

“When we build machines or materials, we use simple control algorithms that are top down, where you have a centralized command that controls all of the moving parts in the machine,” said Peters. “But in this system, the bees are achieving this coordinated change in shape without a central controller. Instead, they are like a set of distributed agents with their own controllers and they have to find a way to coordinate without explicit long-range communication. By studying these types of systems, it could inspire new ways of thinking about distributed control of systems as opposed to traditional centralized control.”

This research was co-authored by Mary Salcedo, a graduate student in OEB. It was funded by the National Science Foundation.