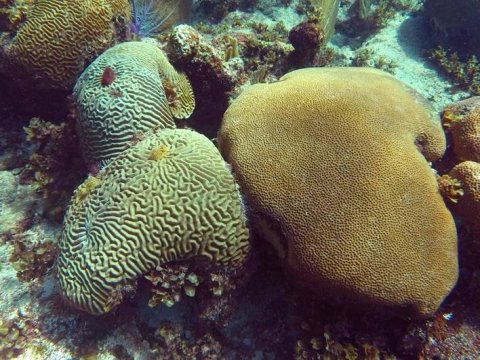 Researchers have long questioned what impact climate change has on the rate at which corals are growing and building reef habitats in the Florida Keys. A new study from the University of North Carolina at Chapel Hill explored this topic, finding both good and bad news. The rate of coral skeletal growth in the Florida Keys has remained relatively stable over time, but the skeletal density of the region’s corals is declining, possibly due to ocean acidification.

The study was led by marine sciences Ph.D. candidate JP Rippe and colleagues at UNC-Chapel Hill, and findings were published in the journal Global Change Biology on Sept. 11.

“As resource managers and scientists work to slow the deterioration of coral reefs across the globe, this research adds new insight into our understanding of how corals have historically been able to cope with climate change and may help to more accurately predict the extent that corals can adapt to their rapidly changing environment,” Rippe said.

These patterns differ from reports on other reef systems in the Caribbean and Indo-Pacific, which have seen severe declines in coral growth rates, and are surprising considering the widespread coral mortality experienced in the Florida Keys over the past three decades. Multiple major coral bleaching events since the 1990s have reduced coral reefs in the Florida Keys to a fraction of their historic extent.

The new study highlights an important distinction between these acute mortality events and long-term trends in baseline growth rates, which ultimately determine whether surviving corals will continue to build new reef framework or will experience net erosion in the near future.

The authors hypothesize that the cooler, subtropical climate of the Florida Keys is likely buffering corals from chronic growth declines associated with global warming, at least for now. A long-term decline in skeletal density may yet reveal an underlying vulnerability to ocean acidification.

Often referred to as “the other carbon dioxide problem,” acidification is a distinct issue from ocean warming but one that stems, in large part, from the same source — carbon dioxide emissions. The absorption of carbon dioxide results in chemical changes in the oceans that reduce the availability of minerals needed by corals and many marine organisms, such as oysters, to build shells and skeletons.