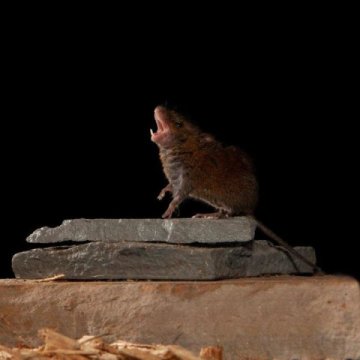 By studying the songs of mice from the cloud forests of Costa Rica, researchers have discovered a brain circuit that may enable the high-speed back and forth of conversation.

Thus, the new study, led by researchers at NYU School of Medicine, launches a new field by employing a novel mammalian model to examine brain mechanisms behind the sub-second precision of vocal turn-taking.

“Our work directly demonstrates that a brain region called the motor cortex is needed for both these mice and for humans to vocally interact,” says senior study author Michael Long, PhD, an associate professor of neuroscience at NYU School of Medicine.

“We need to understand how our brains generate verbal replies instantly using nearly a hundred muscles if we are to design new treatments for the many Americans for whom this process has failed, often because of diseases such as autism or traumatic events, like stroke,” says Long.

Published online as the cover story of Science on March 1, the study found that, along with brain areas that tell muscles to create notes, separate circuits in the motor cortex enable the fast starts and stops that form a conversation between vocal partners.

Despite the ubiquity of vocal exchanges in the natural world, he says, there are no suitable mammalian models in neuroscience for their study. Before the new report, the leading model for studying this back-and-forth was the marmoset, a primate whose conversational turns are considerably slower than human speech, and unlikely to result from the fast muscle response to sensory cues (e.g. motor cortical circuitry).

The research team found that S. teguina songs — series of notes that evolve predictably as the song goes on — changed in social situations as the mice had to “bend and break the songs” to converse. The tight connection between song patterns and readings taken by electromyography, which captures electrical signals as the brain generates muscle contractions, enabled the team to determine the relationships between brain centers and song musculature while two mice coordinated their responses.

In contrast to the findings of past studies, the researchers found that a functional “hotspot” located at the front of the motor cortex to one side — the orofacial motor cortex or OMC — regulated song timing.

To study the contributions of these specialized brain circuits to social singing, the team interfered with cortical regions in the mice using a number of techniques, including devices that cooled the OMC during songs. Long has helped to pioneer the cooling technique in the study of human brain circuits related to speech.

Called focal cooling, it is a safe way to slow the pace of vocalizations without changing the pitch, tone, or duration of individual notes, say the study authors. They argue that the observed, functional separation in the brain between sound generation and timing functions, this hierarchy, is what makes socially relevant exchanges possible.

Moving forward, the researchers are already using their mouse model to guide related exploration of speech circuits in human brains. By understanding the activity that helps to engage two brains in conversation, they can look for the processes that go awry when disease interferes with communication, potentially spurring the development of new treatments for many disorders.

Along with Long, study authors from the NYU Neuroscience Institute and Department of Otolaryngology at NYU School of Medicine were co-first authors Arkarup Banerjee and Daniel Okobi Jr, as well as Andrew Matheson. The work was done in collaboration with Steven Phelps, PhD, director of the Center for Brain, Behavior and Evolution at the University of Texas at Austin, whose lab pioneered the study of the singing mouse in the lab and field. Some of the authors are also members of the Center for Neural Science at New York University.

This research was supported by the New York Stem Cell Foundation, the Simons Foundation Society of Fellows, and the Simons Collaboration on the Global Brain.