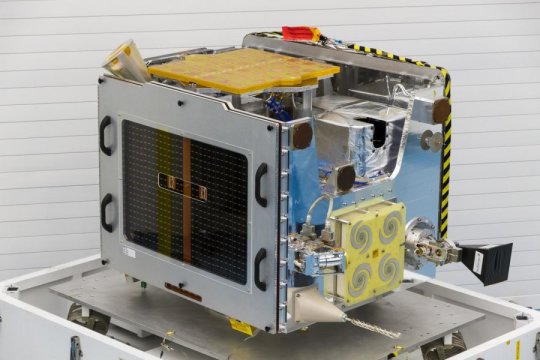 In order to analyse climate change or provide information on natural hazards, for example, it is important for researchers to gather knowledge about rain. Better knowledge of precipitation and its distribution could, for example, help protect against river flooding. On land, monitoring stations can provide data by collecting precipitation. At sea, it’s not so easy.

A new approach by a team around Milad Asgarimehr, who works in the GFZ section for Space Geodetic Techniques and at the Technical University of Ber-lin, together with researchers from the Earth System Research Laboratory of the National Oceanic and Atmospheric Administration of the USA (NOAA) and the University of Potsdam, uses information contained in radar signals from GNSS satellites (Global Navigation Satellite System) to detect rain over the sea. The technology is called GNSS Reflectometry. It is an innovative satellite re-mote sensing method with a broad spectrum of geophysical applications. As-garimehr and his colleagues have now published their results in the journal Geophysical Research Letters.

According to the researchers, the new approach could help to monitor atmos-pheric precipitation better than before. Asgarimehr: “Our research can serve as a starting point for the development of an additional rain indicator. We can pro-vide precipitation information using GNSS Reflectometry with unprecedented temporal resolution and spatial coverage.”

“GNSS are ‘all-weather navigation systems’,” explains Asgarimehr. “A long-held basic assumption was therefore that their signals are composed in such a way that they are not noticeably attenuated by clouds or typical precipitation in the atmosphere and therefore cannot detect precipitation.” The new study there-fore uses a different effect to detect rain over the sea: The roughness of the sea surface.

That surface is ‘rough’ mainly because winds create waves on it. The strength of the satellite signals reflected by the surface is inversely proportional to their roughness: the more and the stronger the waves, the weaker the reflected signal. Recently, researchers were able to prove that it is possible to determine the wind speed over the oceans from measurements of the roughness of its surface.

Raindrops falling on a sea surface also change its roughness. Milad Asgarimehr and the team around him asked themselves: “Can GNSS Reflectometry detect precipitation over oceans?” This is also the title of their recently published study. If the answer is yes, GNSS Reflectometry satellites could detect rain almost like an observer watching raindrops disturb the mirror image of the moon on the surface of a lake at night. However, there is one major difference: unlike moonlight, GNSS signals are able to penetrate the clouds.

A new theoretical model comes to the rescue

During the analysis of data from the navigation satellite TDS-1 (TechDemoSat-1), Asgarimehr found evidence that rain is detectable over the oceans if the winds are not too strong. However, his research still lacked a theoretical foun-dation. “For a long time it was thought that GNSS Reflectometry measure-ments should be insensitive to the small-scale surface roughness caused by raindrops on the sea surface,” explains Asgarimehr. But the publication of a new theoretical model in 2017 provided a plausible estimate of the physics of the scattering of radar signals on a sea surface disturbed by weak winds.