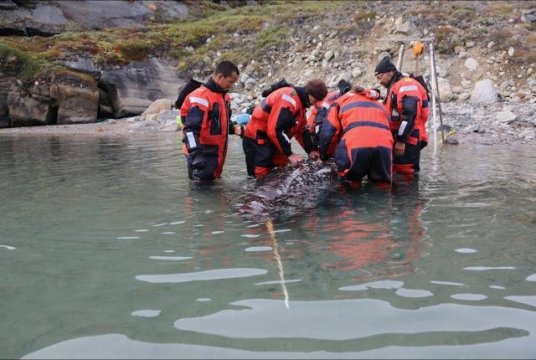 The clicking, buzzing and calling behavioral patterns of elusive East Greenland narwhals have been described thanks to in-depth recordings, in a study published June 13, 2018 in the open-access journal PLOS ONE by Susanna Blackwell from Greeneridge Sciences, Incorporated, United States of America, and colleagues.

Climate change is predicted to increase human activity in the Arctic, including remote areas of Greenland where narwhals live. However, little is known about the whales’ acoustic behavior or their reactions to anthropogenic sounds. Previous studies have mostly relied upon underwater microphones, which are limited in their ability to record spatial and temporal variations.

The author of the present study captured six narwhals in East Greenland and tagged them with acoustic and satellite instruments. The researchers were able to record 533 hours of audio and analyzed their recordings to describe how the whales’ acoustic behavior varied by location and time.

The researchers found that the narwhals produced three types of sounds: clicks, buzzes and calls. Clicks and buzzes were produced during echolocation for feeding, while the authors presume that calls served communication purposes. Calls were typically produced at depths of less than 100 meters, with over half being produced less than 7m from the surface. However, buzzes were produced at much greater depths of between 350 and 650 meters. The authors even used their recordings to identify a likely preferred feeding area: a particular fjord which had especially high buzzing rates. They also noted a possible stress response to capture and tagging: the narwhals were silent afterwards for around a day, reinforcing the need to record over larger timespans.

While much remains unknown about narwhal acoustics, this work provides new insights into where and when these elusive whales produce sound and could establish a baseline to help assess future impacts of climate and anthropogenic changes on narwhals.

Susanna Blackwell says: “Wide-scale changes are taking place in the Arctic, with warmer temperatures leading to shrinking summer ice coverage. More ice-free water means easier access for vessels and industrial operations, such as exploration for oil and gas. The inhospitable pack-ice environment that is narwhals’ home for much of the year has for millennia kept them in relative isolation — even from biologists. Now new amazing tools allow us to take a multi-day, virtual ride on the back of a narwhal!”