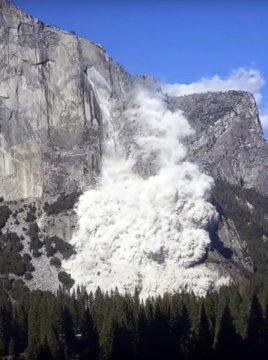 Yosemite National Park contains some of the world’s most iconic landforms, including Half Dome, Yosemite Falls, and El Capitan. Although the cliffs of Yosemite Valley may appear static, rockfalls from these cliffs are common, with a rockfall occurring every four to five days on average. Rockfalls are key to shaping this iconic landscape but also pose risk to the four- to five-million visitors to the park annually.

On 27 and 28 September 2017, eight large rockfalls occurred from the southeast face of El Capitan. These rockfalls resulted in one fatality and two serious injuries, and spurred a complicated rescue and temporary closure of the main road exiting Yosemite Valley. In order to manage these challenging events, the National Park Service (NPS) had a critical, immediate need for quantitative information about the sequence of rockfalls and the potential for additional activity.

Using new “structure-from-motion” photogrammetry techniques in conjunction with baseline laser-scanning data, scientists from the NPS, the U.S. Geological Survey, and the University of Lausanne, Switzerland rapidly analyzed these rockfalls. By comparing 3-dimensional (3D) models of the cliff before, during, and after the rockfalls, the researchers were able to pinpoint the exact locations, dimensions, and volumes of the rockfalls, along with the spatial and temporal pattern of their progression up the cliff.

Structural assessments enabled by the 3D data indicated low potential for imminent rockfall that could reach the road. By having the necessary baseline data in place prior to the El Capitan rockfalls, these analyses and assessments were carried out within hours of the rockfalls occurring, allowing park managers to make difficult decisions quickly.

The ability to rapidly collect, analyze, and disseminate rockfall information in near-real time represents a significant stride forward in informing land managers and the public about this potent natural process.