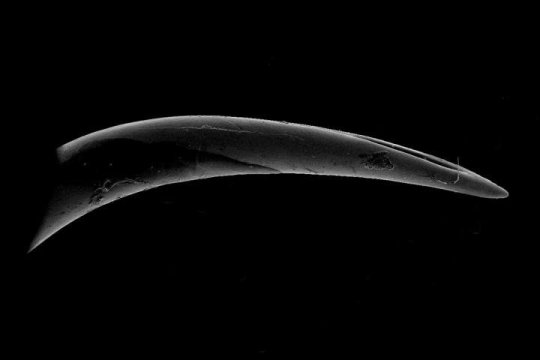 A team that studies how biological structures such as cactus spines and mantis shrimp appendages puncture living tissue has turned its attention to viper fangs. Specifically, the scientists wanted to know, what physical characteristics contribute to fangs’ sharpness and ability to puncture?

They report their findings in the Royal Society journal Biology Letters.

Like most venomous snakes, vipers have fangs that function primarily as hypodermic needles, said University of Illinois postdoctoral researcher Stephanie Crofts, who conducted the analysis of viper fangs with U. of I. animal biology professor Philip Anderson. But vipers — a group that includes rattlesnakes, asps and puff adders — tend to have hinged jaws that fold the fangs up into their mouths for storage.

“They typically don’t have to hold on very long,” he said. “They sink their fangs in and out, and they’re done.”

The researchers wanted to know which characteristics of the fangs made them good at puncturing.

“The question was: How do we measure sharpness?” Crofts said. “Intuitively, we think we know what is sharp and what isn’t, but in biology, we have to measure specific morphological traits.”

The Field Museum in Chicago lent the researchers fangs from a variety of species. The team used 28 viper fangs for its tests.

For each fang, the researchers measured the angle of the tip (was it wide or narrow?), how rounded the tip is, and its surface area. They mounted each fang to a machine that can apply and measure the force required to puncture something — in this case, cubes of ballistics gel of uniform size and density.

Mechanical engineers on the team also manufactured a series of metal punches with varying tip angles, degrees of bluntness and surface areas, and the team also tested those using the same methods.

“With the punches, we could very tightly control the different parameters,” Crofts said. “It was a way of isolating those different metrics.”

The tests revealed that the angle of a fang’s tip contributed the most to sharpness. Even a narrow fang with a rounded tip tended to perform better than a wider fang that was intact — not rounded or dulled — at its end.

“The narrowness of the tip angle is what’s really important,” Crofts said. “I found that a little surprising, because most measures of sharpness focus on the roundedness of the tip. That does come into play, but it’s secondary to that overall angle.”

“This study tells us what aspect of shape to measure when we want to measure sharpness,” Anderson said. “Whether we’re looking at biological systems or other systems, the tip angle appears to be the primary factor driving sharpness.”