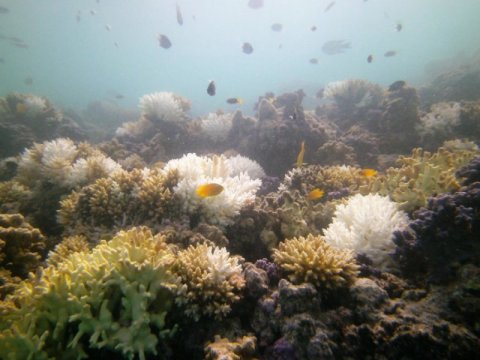 A new international study has found that the marine wildlife that live amongst the coral are affected differently by devastating climate change events, depending on how close to the mainland they are found.

The research, co-authored by Laura Richardson from the University of Exeter, studied the effect of the natural disasters on the Great Barrier Reef (GBR) — which is home to more than 1,500 species of fish including clownfish, parrotfish and lionfish.

The research studied three specific areas of the GBR — the inner reefs closest to the mainland, middle-shelf reefs, and outer-shelf reefs, where the continental shelf drops off into the Coral Sea. Surveys of fish and coral reef habitat were made both five years before and six months after two severe cyclones and a mass coral bleaching event.

While those environmental events caused substantial and widespread loss of coral across all reefs, the numbers of herbivorous fishes remained stable (inner-shelf reefs) or even increased (middle- and outer-shelf reefs).

Dr Richardson, a marine biologist at the University of Exeter’s Penryn Campus said: “After widespread loss of corals due to large storms or severe coral bleaching events, herbivorous reef fish are vital for removing seaweed that starts to grow over the dead corals, so that new corals can grow, and surviving corals can recover.

“Understanding how these herbivorous fish respond across the continental shelf highlights where reefs may be more vulnerable and possibly slower to recover.

“The increased number of herbivorous fish on some reefs in this study is highly promising as they can help prevent the proliferation of seaweed after these huge disturbances.”

Importantly, however, the study showed that the number of herbivorous fish species decreased following the environmental events.

“The loss of species is of greatest concern, affecting the functioning of these reefs and their capacity to respond to future disturbances. It may be setting these reefs up for future ecological surprises” said Dr Hoey from James Cook University in Australia.

The researchers believe the study — the first of its kind — offers a pivotal insight to allow for better conservation and management of coral reefs found worldwide, particularly those reefs exposed to land-based sources of pollution and sedimentation.

The lead-author of the study, Eva McClure from James Cook University, said: “On coral reefs, it is common to find distinct communities of coral and reef fish living together at different locations across the continental shelf.

“But until now, we haven’t known whether these different communities respond in the same way to environmental disturbances or whether specific local conditions might result in different community responses whether close to the mainland or further from shore.”

Coral reefs are made up of thin layers of calcium carbonate (limestone) secreted over thousands of years by billions of tiny soft bodied animals called coral polyps. They are amongst the world’s most diverse marine ecosystems and are home to thousands of species of plants and animals.

The Great Barrier Reef is the world’s largest coral reef, stretching along the northeast coast of Australia, from the northern tip of Queensland, to just north of Bundaberg. However, the biggest differences in coral and fish communities tend to occur from east to west across the Great Barrier Reef.

For the study, conducted by the University of Exeter and James Cook University in Australia, the researchers looked at coral reefs in three distinct positions across the breadth of the continental shelf to compare how the marine life and habitat were affected by the loss of coral following severe environmental disturbances.

While each region was impacted by the disturbances, the research showed that the number of seaweed-eating fish increased on the middle and outer shelf areas, but not in the areas closest to the coast.

The researchers believe that the study not only offers a unique insight into how the reefs are impacted by severe environmental conditions, but also the potential for recovery shown by each specific region.