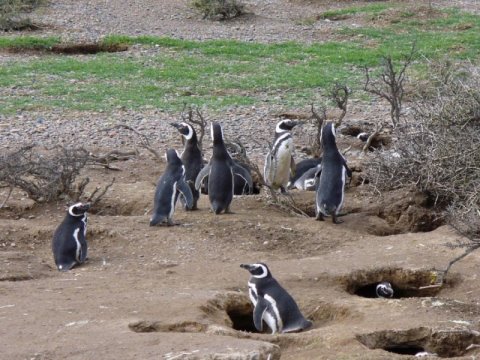 Preserving a 300,000 square km area in Patagonian waters could improve the conservation of 20 % of the population of sea birds in their natural habitat, according to a study published in the journal Conservation Biology and led by the expert Francisco Ramírez, researcher from the Faculty of Biology and the Biodiversity Research Institute of the University of Barcelona (IRBio). The new study, which shows a multidisciplinary approach to define marine areas of interest in conservation, is also signed by Isabel Afán, Joan Giménez and Manuela G. Forero, from the Doñana Biological Station (EBD-CSIC).

One of the marine ecosystems with more biodiversity worldwide

Only 3 % of the ocean surface is protected, which is a lower level to the one in terrestrial ecosystems. Marine ecosystems in the Argentinian Patagonia are one of the areas with a larger biodiversity and highest biological production worldwide. Despite their ecological value, they are now one of the most threatened marine areas by the impact of human activity -intense fishing activity- and changes related to global warming.

At the moment, seabirds are the most threatened bird group worldwide. As part of this research, experts studied the populations of fourteen species of seabirds distributed over 3,000 kilometres in the Patagonian coast. Among the most threatened seabirds are the Olrog’s Gull (Larus atlanticus), the red-legged cormorant (Phalacrocorax gaimardi) and the Magellanic penguin (Spheniscus magellanicus), according to the recent reports by the International Union for Conservation of Nature (IUCN).

In general, the delimitation in protected marine areas is based on the experts’ criteria on the material and data of the distribution of some species which are especially threatened. The new study opens a new view to identify key areas for the conservation of seabirds in one of the most emblematic and productive natural systems of the world.

According to Francisco Ramírez, from the Department of Evolutionary Biology, Ecology and Environmental Sciences of the UB and IRBio, “in our study, we carried out a modelling of the spatial distribution of more than two million seabirds of fourteen different species. With these data, we identified the areas that allow us to protect at least a 20 % of these populations through the application of preservation measures.”

This is one of the first studies to consider the effect of ocean currents in the planning of preserved marine areas. According to Isabel Afán, “if we consider the marine current system of the area, there are other areas that are connected to the priority areas to be protected which are also important regarding management, since they can bring environment alterations to the priority areas. For instance, in accident cases such as ocean dumpings, it is important to know the areas that could bring the risk products to protected areas, and therefore, apply some management measure on these areas.”

The new study to delimit protection areas in Patagonian regions takes into account the protected marine regions that were proposed by BirdLife International, and based on the spatial distribution of pelagic seabirds. However, these species nest outside the Patagonian coasts and visit the marine regions to get food, experts warn. Therefore, apart from including BirdLife’s suggestions, the new study adds a set of coastal areas to improve the conservation of fourteen species that breed around the Patagonian coasts.

People are more and more aware -thanks to international organisms- of the need to find a balance between environmental protection in the oceans and high socioeconomic impact activities (fisheries, leisure activities, etc.). The methodology that was published in Conservation Biology could be applied to marine ecosystems where researchers know about the spatial distribution of breeding colonies of seabirds and the amount of individuals per colony.

Since the marine environment is a broad and dynamic scenario, and hard to access, “it is necessary to review the suggested protected marine areas to improve environmental management tools. Therefore, this is a dynamic and adaptive process which should count on all the involved stakeholders, from fishermen to conservationist entities,” concludes the researcher Francisco Ramírez.