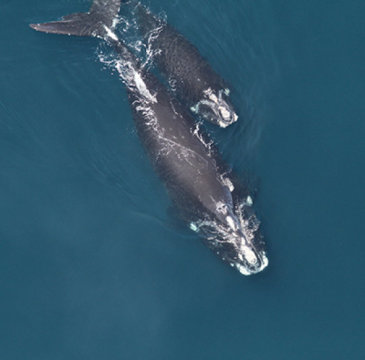 Why is the endangered western North Atlantic right whale population growing far more slowly than those of southern right whales, a sister species also recovering from near extinction by commercial whaling?

NOAA Fisheries researchers and colleagues looked more closely at the question and have concluded that preserving the lives of adult females in the population is by far the most effective way to promote population growth and recovery. Most of these deaths are attributed to entanglement in fishing gear and collisions with ships. The findings are reported in Royal Society Open Science.

“Had North Atlantic right whales increased at the annual rate that we show they are capable of, the population number would be almost double what it is now and their current situation would not be so dire,” said Peter Corkeron, who is lead author of the paper and heads the large whale research effort at NOAA Fisheries’ Northeast Fisheries Science Center.

The North Atlantic right whale, Eubalaena glacialis, is one of three species of right whales. Of the three, it lives in the most industrialized habitat and migrates close to shore.

From 1970 to 2009, 80 percent of all North Atlantic right whale deaths (70 of 87) for which the cause is known were human-induced, mainly from entanglement in fishing gear and collisions with ships. By comparison, most deaths of southern right whales that have been observed were calves in their first year of life and very few were directly attributable to human activities.

Calving Rates Are One Measure

“We studied four populations of right whales, three from the southern populations off eastern South America, southern Africa and southwest Australia plus the western North Atlantic population, that had comparable time-series data and minimum counts of calves known to be born each year,” said Corkeron. “Intensive aerial surveys of North Atlantic right whale calving habitat began in 1992, so that marked the start of our comparison.”

The researchers then looked at the extent to which this difference in annual increase is related to ongoing human-caused injuries and deaths rather than ecologically intrinsic growth rates for each population.

The model results also demonstrated that deaths of adult females accounted for about two-thirds of the difference between the estimated intrinsic growth rate and what has been observed.

The energy demands from the drag associated with entanglement can reduce the likelihood that a female can successfully reproduce. Years between births also increases for females given the recovery period needed from the physical costs of entanglements, which can last from months to years. By comparison, entanglement in fishing gear is almost nonexistent for southern right whales.