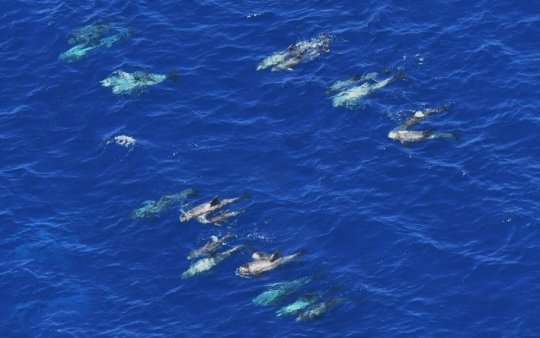 Airborne marine biologists were amazed by the sheer abundance and diversity of large marine wildlife in their recent aerial survey of the Northeast Canyons and Seamounts Marine National Monument, the only marine national monument on the East Coast, about 150 southeast of Cape Cod. Scientists with the Anderson Cabot Center for Ocean Life at the New England Aquarium documented more than 600 animal sightings in just four hours, including a “superpod” of about 250 common dolphins and a rare sighting of a giant manta ray.

The researchers, aboard a small, four-seat airplane, saw the equivalent of three animal sightings every minute. They also spotted hundreds of Risso’s dolphins, some rarely-seen beaked whales, pods of bottlenose dolphins, and the bizarre-looking giant ocean sunfish, also known as the mola mola. The 605-total seen during the September survey nearly doubles the survey team’s previous sighting record of 339 animals in April 2018.

“This was an amazing number of animals to see in such a short period of time and the highest count we’ve seen so far in our surveys,” said Dr. Ester Quintana, head of the survey team. “The marine monument is known as the ‘Serengeti of the sea’ for a reason.”

The Northeast Canyons and Seamounts Marine National Monument is a critical hotspot of biodiversity on the edge of the continental shelf where the shallow seas off of New England drop sharply into the deep waters of the northwestern Atlantic. On September 16, the monument will celebrate its two year anniversary. In 2016, President Obama designated three underwater canyons that are deeper than the Grand Canyon, and four seamounts as tall as the Rockies, as the first American marine national monument in Atlantic waters. At the moment, is still the most strongly protected area in U.S. Atlantic waters. However, in 2017, Secretary of the Interior Ryan Zinke recommended to President Trump has recommended weakening the area’s protections.

“It’s simply impossible to overstate the uniqueness of this habitat and its value as the most protected region in the U.S. Atlantic,” said Vikki Spruill, President and CEO of the New England Aquarium. “And let’s be clear about what it protects: Us. Our way of life. Our values. Our future. The monument should be here to stay.”

Given the great distance offshore, documenting the marine life in the Northeast Canyons and Seamounts is a challenge. During the 4-hour aerial survey, the team spotted 335 common dolphins, 30 bottlenose dolphins, 2 beaked whales, 3 ocean sunfish (mola mola), and a giant manta ray. The manta was an especially unexpected sight because the species is very rarely seen this far north. All of the dolphin groups included many calves and juveniles, reinforcing observations that the monument is a nursery area for several species.

This was the fourth in a series of aerial surveys of the monument that began in summer 2017, and the number of sightings by the scientists during this survey was higher than any other, nearly double the number of animals observed last fall.

Materials provided by New England Aquarium. Note: Content may be edited for style and length.