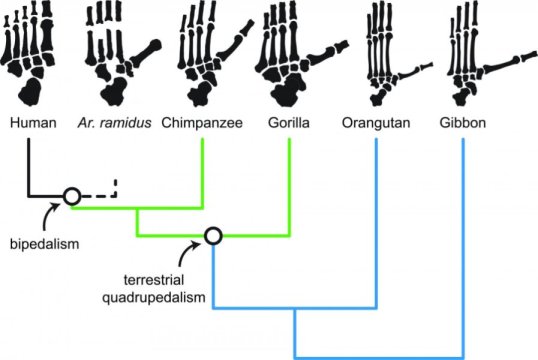 African apes adapted to living on the ground, a finding that indicates human evolved from an ancestor not limited to tree or other elevated habitats. The analysis adds a new chapter to evolution, shedding additional light on what preceded human bipedalism.

“Our unique form of human locomotion evolved from an ancestor that moved in similar ways to the living African apes — chimpanzees, bonobos, and gorillas,” explains Thomas Prang, a doctoral candidate in New York University’s Department of Anthropology and the author of the study, which appears in the journal eLife. “In other words, the common ancestor we share with chimpanzees and bonobos was an African ape that probably had adaptations to living on the ground in some form and frequency.”

The way that humans walk — striding bipedalism — is unique among all living mammals, an attribute resulting from myriad changes over time.

“The human body has been dramatically modified by evolutionary processes over the last several million years in ways that happened to make us better walkers and runners,” notes Prang.

Much of this change is evident in the human foot, which has evolved to be a propulsive organ, with a big toe incapable of ape-like grasping and a spring-like, energy-saving arch that runs from front to back.

These traits raise a long-studied, but not definitively answered, question: From what kind of ancestor did the human foot evolve?

In the eLife work, Prang, a researcher in NYU’s Center for the Study of Human Origins, focused on the fossil species Ardipithecus ramidus (‘Ardi’), a 4.4 million-years-old human ancestor from Ethiopia — more than a million years older than the well-known ‘Lucy’ fossil. Ardi’s bones were first publicly revealed in 2009 and have been the subject of debate since then.

In his research, Prang ascertained the relative length proportions of multiple bones in the primate foot skeleton to evaluate the relationship between species’ movement (locomotion) and their skeletal characteristics (morphology). In addition, drawing upon the Ardi fossils, he used statistical methods to reconstruct or estimate what the common ancestor of humans and chimpanzees might have looked like.

Here, he found that the African apes show a clear signal of being adapted to ground-living. The results also reveal that the Ardi foot and the estimated morphology of the human-chimpanzee last common ancestor is most similar to these African ape species.

“Therefore, humans evolved from an ancestor that had adaptations to living on the ground, perhaps not unlike those found in African apes,” Prang concludes. “These findings suggest that human bipedalism was derived from a form of locomotion similar to that of living African apes, which contrasts with the original interpretation of these fossils.”

The original interpretation of the Ardi foot fossils, published in 2009, suggested that its foot was more monkey-like than chimpanzee- or gorilla-like. The implication of this interpretation is that many of the features shared by living great apes (chimpanzees, bonobos, gorillas, and orangutans) in their foot and elsewhere must have evolved independently in each lineage — in a different time and place.

“Humans are part of the natural world and our locomotor adaptation — bipedalism — cannot be understood outside of its natural evolutionary context,” Prang observes. “Large-scale evolutionary changes do not seem to happen spontaneously. Instead, they are rooted in deeper histories revealed by the study of the fossil record.