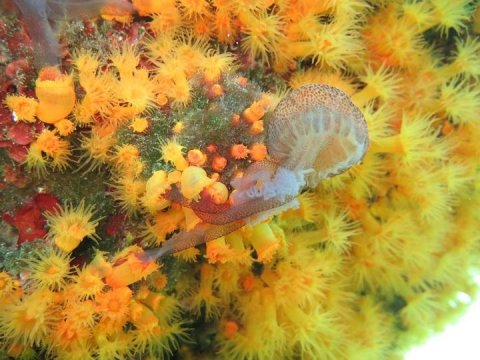 Cave-dwelling corals in the Mediterranean can work alongside one another to catch and eat stinging jellyfish, a study reveals.

Scientists have shown for the first time that corals can cooperate to capture and devour jellyfish which are swept against the walls by ocean currents.

A team including researchers from the University of Edinburgh made the discovery when they spotted jellyfish stuck to undersea cliffs and caves near islands off the coast of Sicily.

Observations carried out by the team have revealed how the corals – which feed mostly on tiny marine creatures called plankton – are able to catch such large prey.

As jellyfish try to swim away they brush against more of the individual corals which each latch onto them.

This coordinated effort to catch prey benefits the coral – a bright orange species called Astroides calycularis – by giving each access to a large meal, the teams says.

The jellyfish seen being eaten – called Pelagia noctiluca, or the mauve stinger – is responsible for most of the painful stings people suffer while swimming in the Mediterranean.

The study, published in the journal Ecology, was a collaboration with researchers in Italy.

Fabio Badalementi, Research Director at the Italian National Research Council and Honorary Professor at the University of Edinburgh, said: “Although both species have been known for years, we had no idea that the coral could catch and eat these jellyfish.”

Professor Murray Roberts, of the University of Edinburgh’s School of GeoSciences, said: “This is a really fascinating observation. The conventional wisdom is that corals don’t eat jellyfish, but these results show that we need to keep both our eyes and minds open to new discoveries.”