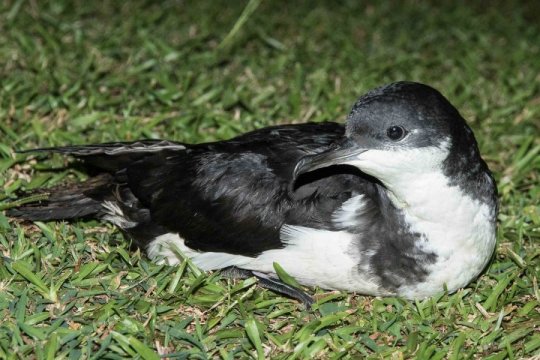 The two seabird species unique to Hawaii, Newell’s Shearwaters and Hawaiian Petrels, are the focus of major conservation efforts — at risk from habitat degradation, invasive predators, and other threats, their populations plummeted 94% and 78% respectively between 1993 and 2013. However, a new study in The Condor: Ornithological Applications offers hope of previously undetected colonies of these birds on the island of Oahu, from which they were believed to have vanished by the late 1700s.

Shearwaters and petrels nest colonially in crevices, burrows, and under vegetation at mid to high elevations. They currently breed on other Hawaiian islands including Kauai and Maui, but were both believed to have extirpated from Oahu prior to European contact in 1778; biologists believed that occasional records from the island were birds thrown off-course at night by city lights.

Pacific Rim Conservation’s Lindsay Young and her colleagues used a spatial model based on elevation, forest cover, and illumination to identify potential suitable breeding habitat for both species on Oahu, then deployed automated acoustic recording units at 16 sites on the island to listen for the birds’ calls in 2016 and 2017, accessing remote mountain locations via helicopter. To their surprise, they detected petrels at one site and shearwaters at two sites.

“We were doing a statewide survey for these species for the U.S. Fish and Wildlife Service as part of recovery action planning, but Oahu was not initially included as one of the sites to survey, since evidence suggested they weren’t there,” says Young. “Since we’re Oahu-based, we thought we would at least put a few recording units out to see if there was anything. And we were surprised, to say the least, that we not only had calls detected, but detected both species across two years.”

These could be the last survivors of remnant breeding populations on Oahu, or they could be young birds from other islands that are searching for mates and breeding sites. “Either way, it gives us hope that we will be able to use social attraction — that is, using calls and decoys — to attract them nest on an island where they were once abundant,” says Young. Oahu birds could help boost connectivity between individual island populations and provide extra insurance in case any one island’s seabird population is decimated by an event such as a hurricane. As petrel and shearwater numbers continue to decline, protecting Hawaii’s remaining seabirds remains a major conservation priority in the region, and the possibility that they’re continuing to breed on Oahu provides new reason for optimism.