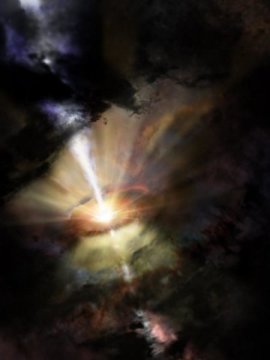 Galaxy evolution can be chaotic and messy, but it seems that streams of cold gas spraying out from the region around supermassive black holes may act to calm the storm.

This is according to an international team of scientists who have provided the first clear and compelling evidence of this process in action.

Using the Atacama Large Millimetre/submillimetre Array (ALMA) of telescopes, the team, which includes researchers from Cardiff University, has observed a supermassive black hole acting like a ‘monumental fountain’ in the middle of a galaxy over a billion light-years from Earth.

At the centre of the galaxy, named Abell 2597, the black hole is drawing in vast stores of cold molecular gas and then spraying them back out again in an ongoing cycle.

The giant elliptical galaxy Abell 2597 lies at the heart of one of the universe’s most massive structures and has a sprawling cluster of other galaxies surrounding it.

According to the researchers, this entire system operates via a self-regulating feedback loop. The incoming material provides power for the fountain as it “drains” toward the central black hole, like water entering the pump of a fountain. This gas then causes the black hole to ignite with activity, launching high-velocity jets of super-heated material that shoot out of the galaxy.

As it travels, this material pushes out clumps and streamers of gas into the galaxy’s expansive halo, where it eventually rains back in on the black hole, triggering the entire process anew.

By studying the location and motion of molecules of carbon monoxide (CO) with ALMA, which shine brightly in millimetre-wavelength light, the researchers were able to measure the motion of the gas as it falls in toward the black hole.

It is from these plumes of gas that new stars are formed in galaxies, and the researchers believe that the process they have observed could be common across the Universe and, more importantly, could be crucial to the development of massive galaxies like this one.

Dr Timothy Davis, from the School of Physics and Astronomy at Cardiff University, said: “Galaxy evolution can be pretty chaotic, and big galaxies like this tend to live hard and die young. For the first time we have been able to observe the full cycle of a supermassive black hole fountain, that acts to regulate this process, prolonging the life of galaxies.”

“The supermassive black hole at the centre of this giant galaxy acts like a mechanical ‘pump’ in a water fountain,” said Grant Tremblay, an astrophysicist at the Harvard-Smithsonian Center for Astrophysics in Cambridge, Massachusetts, and lead author on the paper.

“This is one of the first systems in which we find clear evidence for both cold molecular gas inflow toward the black hole and outflow or uplift from the jets that the black hole launches.”