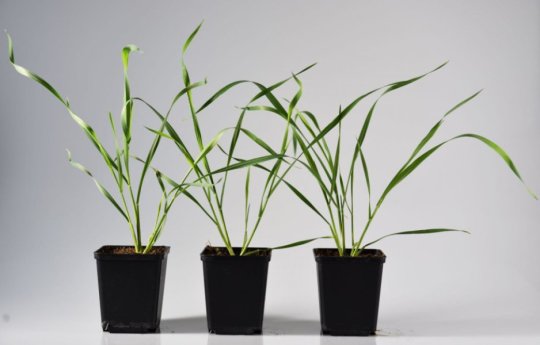 A team of scientists from the University of Bern (Switzerland) and the Max Planck Institute for Chemical Ecology and their partners have characterized multiple functions of benzoxazinoids in wheat: The toxic form of the substances makes the plant directly resistant to lepidopteran larvae, whereas a less toxic form regulates indirect defense mechanisms against aphids. Scientists have identified the “switch” between these different functions as a methyltransferase enzyme, which is activated by caterpillar feeding. This switch enables wheat plants to adapt their defense response to different herbivores. A comparison with maize shows that a methyltransferase also regulates defense processes in maize against different pest insects. However, the two enzymes in wheat and maize have evolved independently from each other (Science Advances, December 5, 2018).

In nature, plants are exposed to a multitude of enemies that feed on their leaves, stems and roots, or feast on their sap. In response to these threats, plants have evolved the capacity to produce secondary metabolites whose functions include preventing herbivores from feeding. Plants can use such defensive substances in a multifunctional manner. A team of researchers led by Tobias Köllner from the Max Planck Institute for Chemical Ecology and Matthias Erb from the University of Bern has now characterized the function of benzoxazinoids in wheat. The researchers used previously obtained, detailed knowledge about the defensive functions of benzoxazinoids in maize. In maize plants, the enzyme methyltransferase acts as a functional switch: it decides whether benzoxazinoids act as efficient toxins to protect the plant from caterpillar herbivory, or whether benzoxazinoids are less toxic, but induce callose production. Callose is used as a cell sealant that blocks sieve elements and makes it difficult for the aphids to suck phloem sap. “Our approach was to introduce the maize switch into wheat and to permanently activate it. Together with our colleagues from the Leibniz Institute of Plant Genetics and Crop Plant Research, we made transgenic wheat plants which were no longer able to choose between toxin production and defense regulation, but constantly produced the toxic form of the benzoxazinoids. This enabled us to elucidate the functions of benzoxazinoids in wheat in detail,” explains Tobias Köllner.

The approach allowed for a thorough analysis of how switching between toxin production and defense regulation affects wheat resistance to lepidopteran larvae and aphids. Moreover, the scientists were able to identify the corresponding switch in wheat and to analyze it from a biochemical and phylogenetic perspective. Although maize and wheat both produce benzoxazinoids — their most important defense, via the same, conserved core biosynthetic pathway — in both species, the genes responsible for switching between their toxic and regulative forms are only distantly related. Thus, the two cereal species likely evolved this switch independently during the course of evolution. Scientists call this phenomenon “convergent evolution.”

“Convergent evolution is widespread in nature and results from the fact that different species evolve a solution for the same problem independently from each other. It is remarkable that two grasses which produce the same specialized defensive substances evolved the corresponding switch for their use independently of each other. On one hand, this may be evidence that the ability to use benzoxazinoids for different functions has evolved relatively recently. On the other hand, it highlights the importance of the ability to adapt defense responses specifically to different herbivores. In our opinion, what we are observing here is the emergence of new regulative mechanisms away from the conserved canon of phytohormones towards more specialized systems,” says Matthias Erb. “Interestingly, plants of the cabbage family also use defensive substances for callose regulation, suggesting that this type of multifunctionality is widespread in the plant kingdom.”

As a next step, the researchers would like to find out how benzoxazinoids control other defensive processes. They are particularly interested in finding an answer to whether there are receptors for benzoxazinoids. If so, these could well be classified as specialized hormones, thus further blurring the boundary between plant toxins and defense regulators. Ultimately, this research could contribute to answering why plants use toxins to regulate defenses in addition to classical plant hormones.