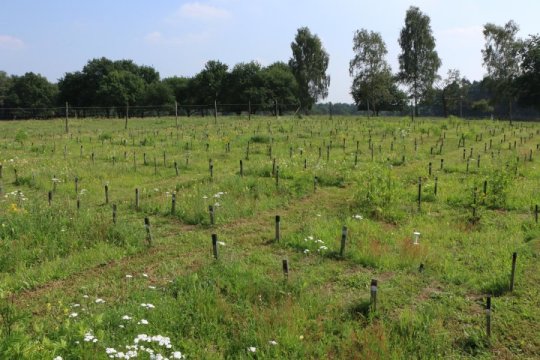 Leaf-feeding caterpillars greatly enrich their intestinal flora by eating soil. It’s even possible to trace the legacy effects of plants that previously grew in that soil through bacteria and fungi in the caterpillars. Researchers of the Netherlands Institute of Ecology (NIOO-KNAW) have just published these findings in the journal Nature Communications. They are of interest not just to scientists, but also to plant growers and farmers.

Do caterpillars play doctor? There are definitely similarities with human children, says NIOO-researcher Martijn Bezemer. “Children sometimes put soil in their mouths, and it’s supposed to boost their immune system. It now appears that caterpillars do the same.”

Earlier NIOO research had found that belowground and aboveground insects can communicate with each other using plants as a kind of ‘green telephone’. Messages can even be left in the soil to be retrieved later, like voicemail. This new research by a team of four ecologists shows that surprisingly, aboveground insects such as caterpillars can retrieve these voicemails from the soil without any mediation from plants.

Emilia Hannula, Feng Zhu, Robin Heinen and Martijn Bezemer conducted experiments that focused on the ‘microbiome’: a community of micro-organisms that you’ll find in almost any place. Lining grains of sand and roots for example, but also on leaves, on teeth and in intestines.

Microbial ecologist Emilia Hannula explains: “the composition of the microbiome in the intestines of the caterpillars we studied was astonishingly similar to that of the soil itself. There was a 75% overlap.” That is indeed surprising, as expectations were that the species of bacteria and fungi found in herbivorous insects would be most similar to those on the plant.

There’s more: the soil the researchers used was from a field experiment in the Veluwe natural area, with various combinations of herbs and grasses. The differences between these plants in growth form and rate also prompted differences in the composition of the soil bacteria and soil fungi, which were still traceable in the insects in the greenhouse experiment.

According to the researchers, it’s the first evidence that these legacy effects in the soil can have such a strong impact on the microbiome of insects. Heinen observed that if caterpillars had the option, they would “move actively from the plant to the ground. They regularly spend time on the soil.”

Caterpillars that were put on an exclusive diet of cut leaves from the same plant (dandelion) instead, without being able to move to the ground, had a much simpler intestinal flora, which was three times less varied: much more in line with that of the micro-organisms on the leaves.

This knowledge could be useful not just for explaining certain scientific effects, but also to farmers and growers. “The history of the soil is visible not just in plants but also in insects. So in order to control pests, for example, you’ll have to take into account the soil in which you work,” says Martijn Bezemer. Healthy and biodiverse soil life can contribute greatly to pest control, and provide food for healthy crops and a species-rich nature.”

So do caterpillars really play doctor? The researchers confirm that they may be actively searching the soil for beneficial substances and micro-organisms: “you could think of it as self-medicating.” Among the things they observed during their experiments was an abundance of soil bacteria that are known to have a symbiotic relationship with the intestines of insects and even humans.

Some of these produce antibiotics: great against pathogens, which are also present in the soil of course. “It’s one of the reasons why we’re pursuing this research further.”