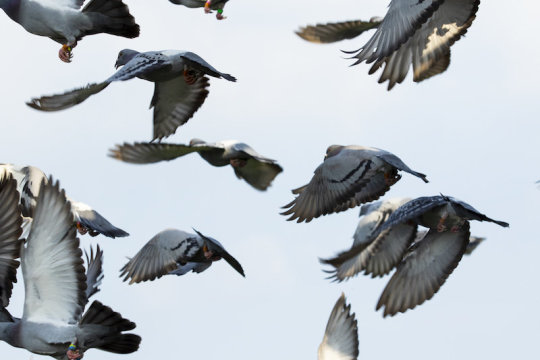 New research publishing June 18 in the open-access journal, PLOS Biology, led by Dr Lucy Taylor from the University of Oxford’s Department of Zoology now reveals that homing pigeons fit in one extra wingbeat per second when flying in pairs compared to flying solo.

Birds that fly in ‘V’-formations, such as geese, are able to conserve energy by flying in aerodynamically optimal positions. By contrast, in species that don’t fly in formation, such as homing pigeons, the costs and benefits of flocking have been less well understood.

The research indicates that flying with another bird requires more energy compared to flying solo. ‘The results of this study were completely unexpected. Energy is the currency of life so it’s astonishing that the birds are prepared to pay a substantial energetic cost to fly together,” said lead-author, Dr Lucy Taylor.

The team used high frequency GPS and accelerometer bio-loggers to measure how pigeons changed their wingbeat patterns when flying in pairs compared to flying solo. The accelerometers act much like fitness trackers but, instead of measuring steps, the researchers measure wingbeats. ‘The increase in wingbeat frequency is equivalent to Usain Bolt running the 100m sprint at his usual speed, whilst fitting in nearly one extra step per second. The pigeons are flapping faster when flying in pairs but hardly going any faster,” said Dr Taylor.

The increase in wingbeat frequency is likely to be related to the demands of coordinating flight. Dr Taylor said: ‘Imagine trying to coordinate with and avoid hitting another small object travelling at around 44 miles per hour. This is nearly two times faster than an Olympic sprinter, and the birds can move up and down as well as left and right. For a pigeon, flapping your wings faster will both give you faster reactions and greater control over your movements, and will help keep your head stable making it easier to track where the other bird is.’

Despite the costs of fitting in one additional wingbeat per second, the birds consistently chose to fly together, suggesting that they were able to gain other benefits from flocking. Birds flying in a pair were simultaneously able to improve their homing accuracy, meaning that they could conserve energy by flying shorter routes home. Combined with increased predator protection from safety in numbers, this research suggests that the overall benefits of flocking outweigh the immediate energetic costs of changing wingbeat patterns.