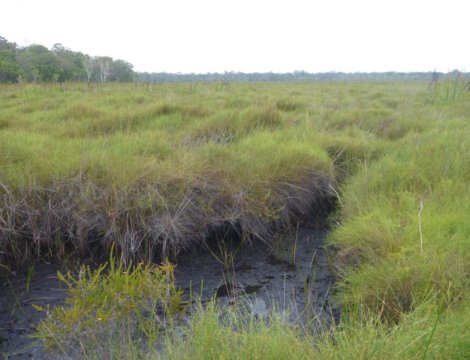 Peatlands are extremely effective at storing carbon, but an international study featuring a University of Queensland researcher has found climate change could stop that.

The group investigated how peatlands — swamps and bogs with organic rich soils — have responded to climate variability between 850 BCE and 1850 CE.

Associate Professor Patrick Moss, from UQ’s School of Earth and Environmental Sciences, believes the research is critical in understanding how climate affects the absorption properties of peatlands.

“Peatlands store between 530 to 694 billion tons of carbon globally,” he said.

“So as our world warms, it’s important to know how their carbon uptake might change, with possibly big repercussions for the future.

“Carbon is absorbed as peatland plants grow, and eventually turns into peat itself, but at the same time decomposing plants and microbes release it, so it’s a fine balance.”

The research revealed that the capacity for carbon to build up in peatlands was much higher in temperate regions during warmer periods, but was much less during the same warm periods in the tropics.

“This has important ramifications as it suggests that peatland carbon sinks will initially store more carbon — counteracting warming to some extent — before switching to releasing more carbon and reinforcing global warming.

“Applying this information to future climate change scenarios suggests that the present day peatland carbon sink will increase slightly until 2100 CE, but then decline.”

Associate Professor Moss’s observations were made at Moon Point on Fraser Island -the only site in Australia and New Zealand and one of the few in the Southern Hemisphere included in the study.

UQ and the University of Exeter have collaborated on the research and are considering further studies into peatlands and carbon dynamics in Australia, Indonesia and South America.