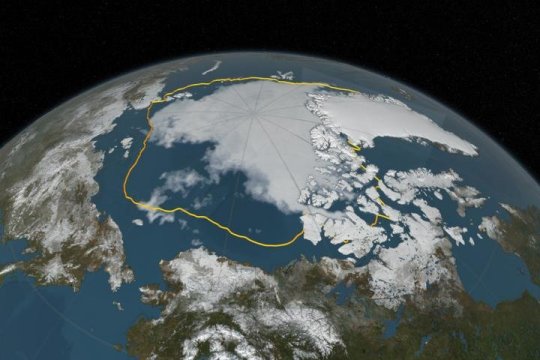 New research, led by former Carnegie postdoctoral fellow Summer Praetorius, shows that changes in the heat flow of the northern Pacific Ocean may have a larger effect on the Arctic climate than previously thought. The findings are published in the August 7, 2018, issue of Nature Communications.

The Arctic is experiencing larger and more rapid increases in temperature from global warming more than any other region, with sea-ice declining faster than predicted. This effect, known as Arctic amplification, is a well-established response that involves many positive feedback mechanisms in polar regions. Q7 What has not been well understood is how sea-surface temperature patterns and oceanic heat flow from Earth’s different regions, including the temperate latitudes, affect these polar feedbacks. This new research suggests that the importance of changes occurring in the Pacific may have a stronger impact on Arctic climate than previously recognized.

Paleoclimate records show that climate change in the Arctic can be very large and happen very rapidly. During the last deglaciation, as the planet was starting to warm from rising greenhouse gases, there were two episodes of accelerated warming in the Arctic — with temperatures increasing by 15°C (27°F) in Greenland over the course of decades. Both events were accompanied by rapid warming in the mid-latitude North Pacific and North Atlantic oceans.

Using these past changes as motivation for the current study, the research team modeled a series of ocean-to-atmosphere heat flow scenarios for the North Pacific and the North Atlantic. They used the National Center for Atmospheric Research’s Community Earth System Model (CESM), to assess the impacts to the Arctic’s surface temperature and climate feedbacks.

Praetorius, who was at Carnegie at the time of the research and is now with the USGS in Menlo Park, CA explained: “Since there appeared to be coupling between abrupt Arctic temperature changes and sea surface temperature changes in both the North Atlantic and North Pacific in the past, we thought it was important to untangle how each region may affect the Arctic differently in order to provide insight into recent and future Arctic changes.”

The researchers found that both cooling and warming anomalies in the North Pacific resulted in greater global and Arctic surface air temperature anomalies than the same perturbations modeled for the North Atlantic. Until now, this sensitivity had been underappreciated.

The scientists looked at several mechanisms that could be causing the changes and found that the strong global and Arctic changes depended on the magnitude of water vapor transfer from the mid-latitude oceans to the Arctic. When warm moist air is carried poleward towards the Arctic, it can lead to more low-lying clouds that act like a blanket, trapping warmth near the surface. The poleward movement of heat and moisture drive the Arctic’s sea-ice retreat and low-cloud formation, amplifying Arctic warming.

The so-called ice-albedo feedback causes retreating ice and snow to lead to ever greater warming through increasing absorption of solar energy on darker surfaces.

In very recent years, the Arctic has experienced an even greater acceleration in warming. The authors note that the unusually warm ocean temperatures in the Northeast Pacific paralleled the uptick in Arctic warming, possibly signaling a stronger link between these regions than generally recognized.

“While this is a highly idealized study, our results suggest that changes in the Pacific Ocean may have a larger influence on the climate system than generally recognized,” remarked Carnegie coauthor Ken Caldeira.