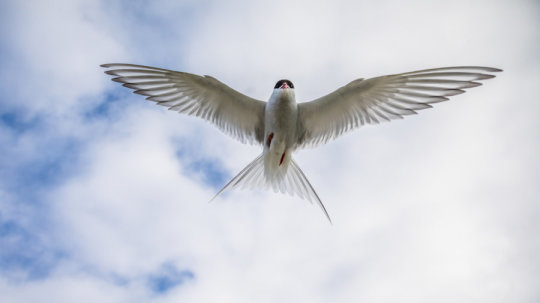 Data from a landmark study of the world’s longest migrating seabird reveals how overland migration is an integral part of their amazing journey.

Analysing the data from electronic tags retrieved from 47 Arctic Terns, the Newcastle University-led team has been able to characterise in unprecedented detail the route and stop-off points during this record-breaking bird’s 90,000 km annual migration.

Led by scientists at Newcastle University, UK, in collaboration with BBC’s Springwatch and The National Trust, 53 adult birds nesting on the Farne Islands off the Northumberland coast were fitted with geolocators over a three year period.

Weighing just over 100 g the Arctic Tern has the longest migration of any bird, travelling all the way to Antarctica for the winter and back to the Farnes, which are owned and managed by the National Trust, to breed in the spring.

So far, 47 tags have been retrieved and the research team, led by Dr Chris Redfern of Newcastle University, are starting to analyse the data.

“Technology is revealing details of the movement and behaviour of these amazing birds in unprecedented detail,” says Dr Redfern, whose initial findings in collaboration with Dr Richard Bevan are published today in the academic journal Ibis.

“Arctic Terns feed on surface fish and other marine animals so it has always been assumed they would migrate via a coastal route, down the North Sea and through the English Channel.

“But instead our data has shown their regular route is to travel overland across the UK to the Irish Sea and some are going even further crossing Ireland to the North Atlantic.”

After that, it’s a long hard trek south, down the coast of West Africa and then out across the Indian Ocean.

“Our data suggests their flight over the Indian Ocean is an 8,000 km long haul without a break, probably feeding on the move,” says Dr Redfern. “For a bird that weighs less than an iPhone, that’s an amazing feat.

“Many of the terns have gone even further, ending up around New Zealand before turning south towards the East Antarctic, finally arriving four months after leaving Northumberland.

“The scale of their migratory journey across featureless oceans is breath-taking! In that context, the UK land mass between the Irish Sea and the Farne Islands must be no obstacle at all to an Arctic Tern and the quickest route to their breeding colony.”

The data also highlights key stop-off points off the coast of Lancashire and Wales in April and May as the Terns make their way back to the Farne Islands to breed. Dr Redfern, who carried out the study with Dr Richard Bevan and the Natural History Society of Northumbria, said the detailed picture of Arctic Tern migration patterns would help with future conservation efforts.

“Understanding their behaviour in detail means we can start to build a picture of which areas are important feeding and breeding grounds.”

More than two thousand pairs of Arctic Terns breed on the Farne Islands. Sitting two miles off the coast of Northumberland, the islands are home to 87,000 pairs of seabird, including Puffin, Eider Duck and Shag. The National Trust has cared for the Farne Islands since 1925.

Previous studies have shown these birds are likely to return each year to the same few square metres of ground, making it an ideal environment to carry out year-to-year tracking studies with geolocators.

Earlier data from the study, featured on BBC Springwatch in 2016, showed that one bird had flown an estimated 96,000km (almost 60,000 miles) from its breeding grounds on the Farne Islands to its winter quarters in Antarctica.

Over its lifetime the record-breaking tern could be flying as far as 3 million km between the Farne Islands and Antarctica, the equivalent of nearly four trips to the moon and back.