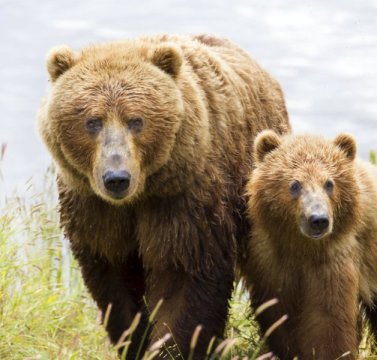 Alaskan wildlife management that prioritizes reducing bear and wolf populations so hunters can kill more moose, caribou and deer is both backward and lacks scientific monitoring, ecologists say in a paper published today in PLOS Biology.

Paring populations of large carnivores not only fails to meet the goal of creating a “hunting paradise” but may also interfere with important ecosystem services that predators atop the food chain provide, the scientists assert.

“Gray wolves, brown bears and black bears are managed in most of Alaska in ways designed to significantly lower their numbers,” said study co-author William Ripple, distinguished professor of ecology in the Oregon State University College of Forestry. “Alaska is unique in the world because these management priorities are both widespread and legally mandated.”

The paper notes that favoritism toward moose, caribou and deer over large carnivores acquired legal backing in Alaska with the 1994 passage of the state’s Intensive Management Law. The legislation effectively calls for cutbacks in big carnivores to increase how many hoofed game animals are taken by humans.

“The law does also identify habitat management as a form of intensive management, but habitat management hasn’t been used effectively as a tool to increase abundance of these ungulates,” said corresponding author Sterling Miller, a retired research biologist with the Alaska Department of Fish and Game. “Therefore, the default tool is predator control, the most widespread form of which is liberalizing state hunting and trapping regulations for large carnivores. This liberalization has been most extreme for brown bears, as this species used to be managed very conservatively.”

The paper points out that reported kills of brown bears by hunters have more than doubled over the past three decades and that since 1980 regulations intended to reduce predators have been in effect even in Alaska’s 11 national preserves, which are managed by the National Park Service.

“Since 2000, state wildlife managers have done no studies to determine trends in brown bear populations anywhere in Alaska where intensive management for moose and caribou is ongoing and harvests of brown bears have, correspondingly, increased,” Miller said. “Basically, managers have liberalized regulations for large carnivores in a strategy of ‘kill as many as possible and hope that it is OK in the end.’ This is not science-based management.”

The authors stress that brown bears have the lowest reproductive rates of any large mammal in North America and are particularly susceptible to overharvest, and that the Alaskan government is the only wildlife-managing entity in the world whose goal is to reduce bear abundance.

“There are some places in Alberta, Canada, where wolves are being managed to reduce their abundance in the hope of keeping very small populations of woodland caribou from going extinct,” Miller said. “This is different because the objective of that management is a conservation objective and not an objective of middle-class people putting more wrapped packages of moose meat in their freezers.”

State and federal priorities for “subsistence hunting” are also somewhat problematic but only where they allow for harvests that aren’t really of a subsistence nature, the authors say.

Many of the preserves are adjacent to national parks and both the parks and preserves were created by ANILCA. But with the loosening of hunting regulations for large carnivores in Alaska, the same more-lax regulations largely apply to the preserves as well, meaning predator control is occurring there too.

“Science-based management of large carnivores in most of Alaska will require the political will and wisdom to repeal Alaska’s Intensive Management Law,” the paper states. “Alternatively or additionally, it will require professional wildlife managers to resist adoption of predator reduction regulations that are not conducted as experiments and/or do not include adequate monitoring programs of both carnivores and ungulates.”

Additional information on trends in brown bear hunting regulations and harvests in Alaska is available in a 2017 paper by some of the same authors as the PLOS Biology article.