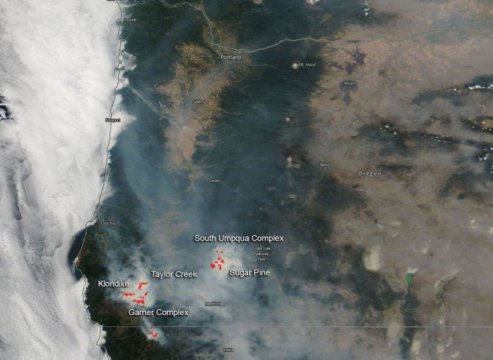 Oregon, one state above California, is also having its share of fire storms and weather concerns. Five large fires/complexes are alight in the southwest corner of the state and all started on the same day with a region-wide lightning storm.

The Garner Complex is an 8,886 acre wildfire north of the community of Rogue River in Jackson County, Oregon. The Complex is burning in a checkerboard mix of lands managed by the Bureau of Land Management and private landowners. The steep rocky terrain and historically high temperatures presented challenges for fire suppression efforts. The fire threatened valuable several hundred residences, private timber lands and habitat for threatened species. The fire began with a region-wide lightning storm on July 15 which ignited 12 fires that became the Garner Complex. The Taylor Creek Fire was added to the complex, but later grew to a point where it required its own management team. Currently, well over half of the fire has no active operations, only daily monitoring and patrol. Fire managers expect that they will place the remaining portions of the fire in patrol status at the end today’s shift.

The Taylor Creek fire once part of the Garner Complex grew to 41,103, much larger than the whole of the Garner Complex. This fire is now 38% contained but continues to exhibit moderate fire behavior with uphill runs, backing, and isolated torching. As with most of the fires in the West this year the prevailing problem has been the weather. Record temperatures, high winds, dry conditions and low humidity continue throughout the region making firefighting more difficult and fire growth much easier.

The Klondike fire just southwest of the Taylor Creek fire is 30,873 acres and is 15% contained. This fire began on the same day as the other fires during the region-wide lightning storm on July 15. This fire, however, continues to be very active with large amounts of fuel available including litter and understory, grass, and chapparal. Fire behavior has included torching,spotting, and uphill runs. Weather concerns are the same as for the two preceding fires since they are all located near each other.

The Sugar Pine fire located near Prospect, Oregon, was also the result of the July 15 lightning storm. It is currently at 8,885 acres. There are 704 personnel fighting this fire at present. The weather concerns for this fire include hot, dry conditions, with low humidity and winds. The fuels for the fire include grass, brush, and timber.