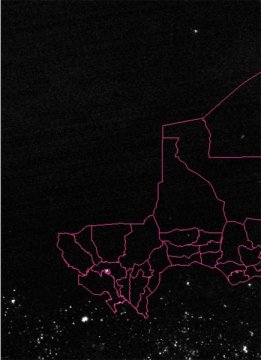 A massive release of passive-surveillance satellite data of nighttime lights could help researchers in fields ranging from agriculture to epidemiology. Researchers at Penn State and the University of Southampton in the UK have provided open access to detailed satellite data on brightness for five cities in Niger and Nigeria from 2000 to 2005, as well as detailed methods for analyzing the data to track seasonal population movements. A paper describing the data and methods, which can be applied to other populations and other similar data sets, is available in the online, open-access journal Scientific Data.

“This type of data set has never been released before,” said Nita Bharti, assistant professor of biology at Penn State and lead author of the paper. “We initially used it to track seasonal changes in population sizes to help vaccination campaigns achieve higher coverage levels in areas where diseases like measles still pose a large threat. We later received a lot of inquiries for access to these data from researchers in diverse fields. The data and associated code in ‘R’ — an open-source statistical computing software — are now openly available on ‘ScholarSphere,’ Penn State’s open-access, online data repository.”

The data originate from the Defense Meteorological Satellite Program (DMSP), which is a U.S. Department of Defense program run by the Air Force Space Command that is largely focused on cloud and other meteorological observations. The DMSP satellites capture thermal infrared images, which are used to study cloud cover, and visual images of the earth. Photographs are taken daily during the day and at night. By choosing only nighttime images, researchers can measure anthropogenic — related to human activity — light to address a variety of research questions.

“No one was really using the visual images until DMSP started to release annual composites of the Earth at night,” said Bharti. “But the annual composites are only really useful if you are looking at annual or longer-scale changes. We decided to dig into the archives to pull out and process the daily images. We can then look for differences between the images on shorter time-scales and see things like seasonal changes in populations, which are really important for infectious diseases and public health interventions. Without this imagery, it would be incredibly difficult and require a massive amount of work on the ground to see detailed population changes across six years.”

In addition to the data release, the researchers also provide detailed methods for analyzing this type of data, which could be applied to other similar data sets for different time periods and different locations.

“One of the things we wanted to get across is the value of this type of passive-surveillance data,” said Bharti. “Satellites have been collecting this type of data for decades and even though these particular images were initially collected to study cloud cover, we can use them to address lots of different research questions. It’s unconventional, but it’s out there and is reasonably easy to access and it’s underutilized, maybe because people don’t know quite what to do with it or how to get it. That’s why we published these methods as a sort of road map.”