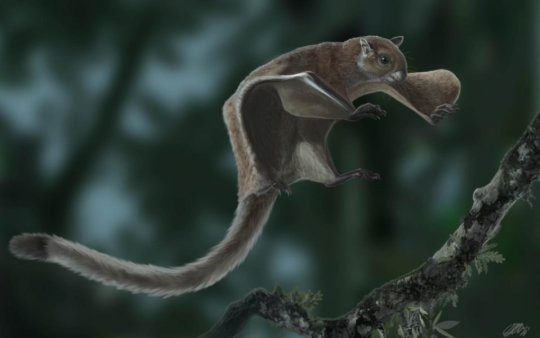 The oldest flying squirrel fossil ever found has unearthed new insight on the origin and evolution of these airborne animals.

Writing in the open-access journal eLife, researchers from the Institut Català de Paleontologia Miquel Crusafont (ICP) in Barcelona, Spain, described the 11.6-million-year-old fossil, which was discovered in Can Mata landfill, approximately 40 kilometers outside the city.

“Due to the large size of the tail and thigh bones, we initially thought the remains belonged to a primate,” says first author Isaac Casanovas-Vilar, researcher at the ICP. In fact, and much to the disappointment of paleoprimatologists, further excavation revealed that it was a large rodent skeleton with minuscule specialised wrist bones, identifying it as Miopetaurista neogrivensis — an extinct flying squirrel.

Combining molecular and paleontological data to carry out evolutionary analyses of the fossil, Casanovas-Vilar and the team demonstrated that flying squirrels evolved from tree squirrels as far back as 31 to 25 million years ago, and possibly even earlier.

In addition, their results showed that Miopetaurista is closely related to an existing group of giant flying squirrels called Petaurista. Their skeletons are in fact so similar that the large species that currently inhabits the tropical and subtropical forests of Asia could be considered living fossils.

With 52 species scattered across the northern hemisphere, flying squirrels are the most successful group of mammals that adopted the ability to glide. To drift between trees in distances of up to 150 metres, these small animals pack their own ‘parachute’: a membrane draping between their lower limbs and the long cartilage rods that extend from their wrists. Their tiny, specialised wrist bones, which are unique to flying squirrels, help support the cartilaginous extensions.

But the origin of these animals is highly debated. While most genetic studies point towards the group splitting from tree squirrels about 23 million years ago, some 36-million-year-old remains that could belong to flying squirrels have previously been found. “The problem is that these ancient remains are mainly teeth,” Casanovas-Vilar explains. “As the dental features used to distinguish between gliding and non-gliding squirrels may actually be shared by the two groups, it is difficult to attribute the ancient teeth undoubtedly to a flying squirrel. In our study, we estimate that the split took place around 31 and 25 million years ago, earlier than previously thought, suggesting the oldest fossils may not belong to flying squirrels.

“Molecular and paleontological data are often at odds, but this fossil shows that they can be reconciled and combined to retrace history,” he adds. “Discovering even older fossils could help to retrace how flying squirrels diverged from the rest of their evolutionary tree.”

An exceptional site in a rubbish dump

The Can Mata landfill holds a set of more than 200 sites ranging in age between 12.6 and 11.4 Ma (middle to late Miocene). In the last 20 years, excavations carried out by the ICP in Can Mata have led to the identification of more than 80 species of mammals, birds, amphibians and reptiles. A remarkable number of primate remains from the site have revealed three new species of hominoids, nicknamed ‘Pau’ (Pierolapithecus catalaunicus), ‘Laia’ (Pliobates cataloniae) and ‘Lluc’ (Anoiapithecus brevirostris). Various studies of mammal remains recovered from the site, including the current work in eLife, indicate the existence of a dense subtropical forest.