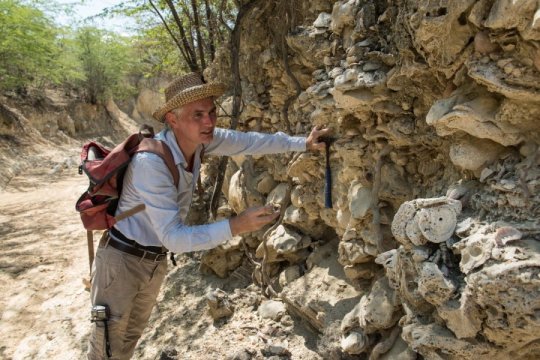 A quick look at the fossil record shows that no species lasts forever. On average, most species exist for around a million years, although some species persist for much longer. A new study published in Scientific Reports from paleontologists at the Smithsonian Tropical Research Institute in Panama shows that young species can take advantage of new opportunities more easily than older species: a hint that perhaps older species are bound to an established way of life.

“We’re lucky to live and work in Panama where nature has set up its own evolutionary experiment,” said Aaron O’Dea, STRI paleontologist. “When the Caribbean Sea was isolated from the Pacific Ocean by the slow uplift of the Isthmus of Panama, nutrient levels fell and Caribbean coral reefs proliferated. We can use the excellent fossil record to observe how Caribbean life responded to this dramatic environmental and ecological transformation.”

The team’s best choice for tracking the change was a peculiar family of marine animals known as the cupuladriid bryozoans. These relatively small animals consist of unusual, free-living, disc-shaped colonies of individuals called zooids. “Colonies form through sexual reproduction or asexually by cloning, as bits of the colony break off and continue to grow,” said STRI post-doc and coauthor Blanca Figuerola. “They abound on the sea floor along the continental shelf across the tropics, filtering plankton from the water via a beautiful waving crown of tentacles. When colonies die, their hard skeletons remain, and are exceptionally abundant as fossils.”

O’Dea’s group collected and identified more than 90,000 cupuladriid colonies from 200 fossil samples and 90 more recent samples collected by dredging the sea floor. The samples contained mud, sand, coral remains and other indicators of the kind of habitats where the bryozoans had lived. The team measured the abundances of the 10 most common species along gradients of these environmental and ecological indicators.

“We were intrigued to find that, even though all species could expand into the new Caribbean habitats created after final formation of the Isthmus, different species did so at different speeds,” said O’Dea. “The patterns were clear — old species that originated before 8 million years ago took 2 million years longer to expand into the new habitats than the younger species.”

“Perhaps younger species, which have smaller populations, are less tied to their history,” said former STRI post-doc and University of Saskatchewan researcher

Santosh Jagadeeshan, another co-author. “Old species, with large, settled populations may be less able to escape from established roles and defined environmental tolerances because they mate with each other creating a high gene flow that makes it hard for genes for new traits to become established. It seems you can’t teach an old dog new tricks in evolution, either.”