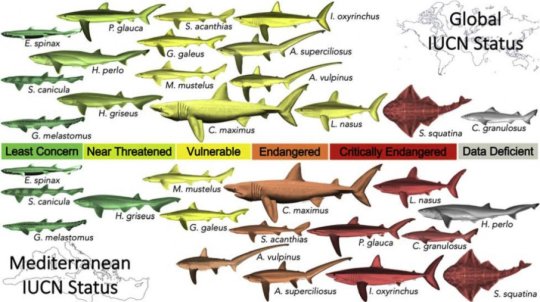 Shark and ray species commonly caught in the Mediterranean and Black seas are not being reported in official statistics, new research from the Sea Around Us initiative at the University of British Columbia shows.

A new study published in Marine Policy reveals that 97 per cent of the sharks and rays caught and brought to market domestically by fleets from the European, North African and Middle Eastern countries that surround these seas are not reported by species.

“The Mediterranean and Black Seas have historically harboured a high diversity and abundance of sharks and rays, but now between between 53 per cent and 71 per cent of them face an elevated risk of extinction,” said Madeline Cashion, lead author of the study, who carried out the research at the Sea Around Us initiative at UBC’s Institute for the Oceans and Fisheries.

By not keeping track of the different species of sharks and rays that they are bringing to port, countries may be further threatening those already at risk.

“Part of the problem is that many sharks and rays in the region are caught as bycatch in fisheries targeting other species and are brought to port either because there is a small market for them or because, by law, they cannot be thrown back at sea,” Cashion said. “If neither fishers nor authorities keep detailed records of what is being caught, then it’s very difficult to detect declines and design effective measures to protect threatened species.”

Despite the lack of reporting, Cashion found in her research that sharks and rays have become increasingly rare following centuries of exploitation and the more recent expansion and intensification of fisheries in the Mediterranean, in particular of the non-European ones. In many cases, catch data is the only source of information to know if species still exist where they were historically found.

“The problem is that detailed catch data is hard to come by because species identification can be very tricky,” Cashion said. “Good reporting relies on the financial and logistical support of governments and fisheries management organizations. Fishers can’t be expected to take it on alone.”

Given the threats posed by the fishing industry to at-risk sharks and rays due to the lack of specific information, the researchers call for a better implementation of existing data collection and reporting policies.

“To understand the real trends of shark and ray exploitation and abundance, we need to know what is discarded at sea because not all species survive after being pulled up by a net,” said Daniel Pauly, co-author of the study and the Sea Around Us Principal Investigator. “For example, 98 per cent of scalloped hammerheads die but when it comes to thornback rays, only 2 per cent of them perish. We just need to know what is being caught.”