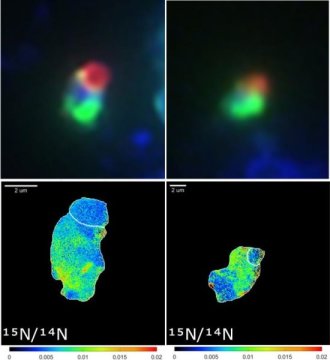 Microbes that provide natural fertilizer to the oceans by “fixing” nitrogen from the atmosphere into a form useable by other organisms were once thought to be limited to warm tropical and subtropical waters. Now, however, researchers have documented nitrogen fixation by an unusual type of cyanobacteria in the cold waters of the Bering and Chukchi Seas.

“This goes against all the textbook assumptions about where nitrogen fixation occurs. All the mathematical models for nitrogen input to the oceans are constrained by temperature because of this underlying assumption,” said Jonathan Zehr, professor of ocean sciences at UC Santa Cruz and senior author of a paper on the new findings published Monday, December 10, in Proceedings of the National Academy of Sciences.

Katie Harding, a graduate student in Zehr’s lab and first author of the paper, explained that in many parts of the oceans, productivity is limited by the availability of nitrogen. “Nitrogen fixation fuels the food chain in some areas, so it’s important to understand what all the sources are,” she said.

The nitrogen fixation Harding discovered in the Arctic is carried out by an organism called UCYN-A, which was first discovered by Zehr’s group in the open ocean near Hawaii. After finding DNA evidence of a previously unknown nitrogen-fixing microbe, Zehr’s lab eventually identified it as a type of cyanobacteria oddly lacking the capacity for photosynthesis. Finally, in 2012, they discovered that it lives in a close symbiosis with a type of small, single-celled algae. In this mutually beneficial partnership, UCYN-A provides fixed nitrogen while the haptophyte alga provides fixed carbon through photosynthesis.

Meanwhile, Zehr and other researchers were finding the newly discovered UCYN-A in increasingly widespread areas of the ocean, first in coastal waters and then in waters as far north as the Danish Straits. UCYN-A cannot be grown in the laboratory, but it can be identified and isolated from water samples using sophisticated cell sorting and gene sequencing techniques.

The new study shows not only that it can exist in the Arctic, but that it is functional and fixing nitrogen in Arctic waters with temperatures below 4 degrees Celsius (40 degrees Farhrenheit). “It’s not just cells drifting up into the Arctic on ocean currents. It’s active, and it’s the only real cyanobacterial nitrogen-fixer in the Arctic,” Zehr said.

Cyanobacteria (once referred to misleadingly as blue-green algae) are bacteria that can photosynthesize like plants, although UCYN-A seems to have lost this ability. Only some cyanobacteria are able to fix nitrogen, including Trichodesmium, which was once thought to be the main source of nitrogen fixation in the open ocean. Trichodesmium, however, doesn’t grow in waters cooler than 20 degrees Celsius (68 degrees Fahrenheit).

“It’s hard to measure nitrogen fixation rates in water samples and tell which organism does how much, but I suspect that if you were to add up global nitrogen fixation by UCYN-A, it is a substantial and possibly the biggest source of nitrogen in the ocean,” Zehr said.

Although it hasn’t been found in the Southern Ocean around Antarctica yet, Zehr said that is probably the next place he’ll look for it. When his collaborators at the Virginia Institute of Marine Science first proposed looking in the Arctic, he was hesitant. “I didn’t expect to find much nitrogen fixation at all, let alone nitrogen-fixing cyanobacteria. It just goes to show, you don’t know until you look,” he said.

“One of the interesting questions from a biological standpoint is how UCYN-A can tolerate such a wide range of temperatures, especially when the temperature range for Trichodesmium is so narrow,” Harding said.

On a research cruise out of Nome, Alaska, in September 2016, Harding and other members of the team collected and processed water samples for analysis back in the laboratory. On-ship processing included incubating samples with nitrogen-15 so that any newly fixed nitrogen would be labeled with the heavy isotope. This enabled the researchers to measure nitrogen fixation rates and to show that UCYN-A was actively fixing nitrogen. Back in the lab, they used fluorescent labeling to identify UCYN-A and an advanced mass spectrometry technique to detect nitrogen-15 in the cells of UCYN-A and its algal symbiont.

“The rates in the Arctic are pretty low, so UCYN-A may not be very important there now. But if Arctic warming continues, it will become more and more important as a source of nitrogen in Arctic ecosystems,” Zehr said.

In addition to Harding and Zehr, the coauthors of the paper include research specialist Kendra Turk-Kubo at UC Santa Cruz, Rachel Sipler and Deborah Bronk at the Virginia Institute of Marine Science, and Matthew Mills at Stanford University. This work was funded by the National Science Foundation and the Simons Foundation.