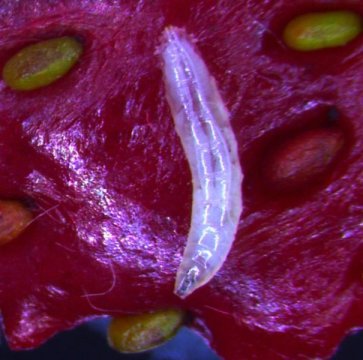 Fruit fly larvae can taste ribonucleosides, the building blocks of gene transcripts, according to a new study publishing on August 7 in the open-access journal PLOS Biology by Hubert Amrein and Dushyant Mishra of Texas A&M Health Science Center and their colleagues. Moreover, the ability to detect ribonucleosides in the environment helps promote the rapid growth needed by developing larvae and dramatically increases their survival.

Fats, proteins, and carbohydrates make up the bulk of calorically rich macronutrients sought out by animals of all kinds. Taste receptors are generally thought to be attuned to identifying these compounds in the environment, allowing organisms to distinguish them from unpalatable and harmful compounds, which by contrast are usually bitter. Animals also need a fourth major macronutrient class, the ribonucleosides and deoxyribonucleosides, which are used to make RNA and DNA, but because animals can build their own ribonucleosides from carbohydrates and proteins, they had not previously been thought to be sensed by taste receptors.

While testing the ability of fruit fly larvae to detect a variety of sugars, the authors discovered their strong interest in consuming ribose, a sugar component of RNA, as well as RNA itself. The larvae were found to detect these compounds using previously uncharacterized members of the Gustatory Receptor (Gr) protein receptor family, a subfamily called Gr28. Laval taste neurons expressing members of Gr28 were activated by ribose and RNA (but not deoxyribose), and when Gr28 genes were transferred to sugar sensing taste neurons that don’t normally express them, these neurons were also activated by ribose and RNA.

This taste for RNA is not just a luxury; the authors found that larvae given food from which ribonucleosides were excluded fared worse than those grown on whole medium, and larvae lacking Gr28 receptors grew slower and had poor survival rates than those with them.

Even though the body can synthesize them, the ability to detect these compounds in the environment provides an advantage to a rapidly growing organism such as the fruit fly larva, the authors argue, since the larva must increase its body weight by 200-fold in only a few days. “We hypothesize that the ability to taste RNA evolved because ingestion, rather than de novo synthesis, provides a survival advantage during this period of extreme growth,” Amrein said.