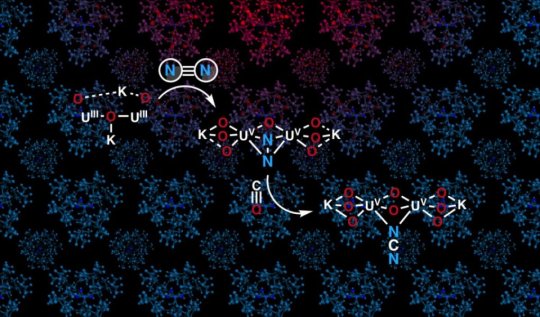 Abundant in nature (78% of the air we breathe), nitrogen is rarely used in the industrial production of chemicals, with the most important process being the synthesis of ammonia, which is in turn used for the preparation of agricultural fertilizers.

Using nitrogen as a raw material (“feedstock”) for industrial usage is accomplished by a reaction known as “nitrogen fixation.” In this reaction, molecular nitrogen (or “dinitrogen”; N2) is split into two atoms of nitrogen that can then be connected to other elements like hydrogen or carbon, which allow nitrogen to be stored as ammonia or converted directly in higher value compounds.

But ammonia is not easy to make on an industrial level; the main process, called “Haber-Bosch,” uses an iron-based catalyst at temperatures around 450oC and pressures of 300 bar — almost 300 times the pressure at sea level. In order to make the process more cost-effective, chemists have focused on the development of new systems that can transform nitrogen into useful compounds using mild low-energy conditions.

In 2017, the lab of Marinella Mazzanti at EPFL was able to convert molecular nitrogen into ammonia in ambient conditions by synthesizing a compound containing two uranium(III) ions and three potassium centers held together by a nitride group.

Now, the group, in collaboration with other EPFL groups, has shown that by replacing the nitride bridge in the uranium system with an oxo bridge they can still bind dinitrogen. In addition, the bound dinitrogen can be easily cleaved in ambient conditions by carbon monoxide to make cyanamide, a compound that is widely used in agriculture, pharmaceuticals, and various organic compounds.

The reactivity of the oxo-bridged dinitrogen complex was remarkably different compared to the previous nitride complex and the few other nitrogen complexes known in the field. Computational studies then allowed the scientists to relate these differences in reactivity to the bonding in the uranium-oxo/-nitride bridge.

“These findings provide important insight into the relation between structure and reactivity that should extend to nitride and oxide materials,” says Marinella Mazzanti. “Moreover, the implementation of these compounds in catalytic systems could ultimately lead to a lower cost access to fertilizers.”