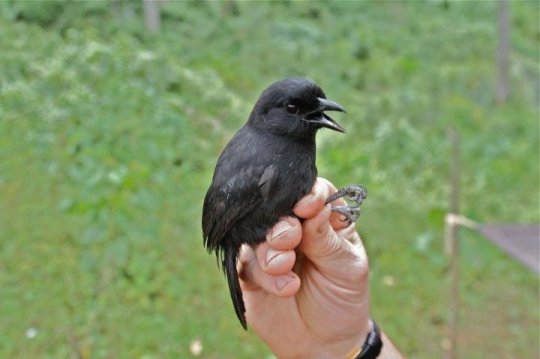 Central Africa’s Albertine Rift region is a biodiversity hotspot consisting of a system of highlands that spans six countries. Recent studies have shown that the population of sooty bush-shrikes occupying the region’s mid-elevation forests is a distinct species, and new research from The Condor: Ornithological Applications reveals that this newly discovered species may already be endangered due to pressure from agricultural development.

The newly identified mid-elevation species has been dubbed Willard’s Sooty Boubou, as opposed to the previously recognized high-elevation species, the Mountain Sooty Boubou. The Field Museum’s Fabio Berzaghi (now with the CEA Laboratory for Sciences of Climate and Environment in France) and his colleagues used museum records and bird survey records to analyze the ecological niche occupied by each species, and their results confirm that there is very little overlap between the ranges of the two species — Willard’s Sooty Boubou is found at approximately 1200-1900 meters and the Mountain Sooty Boubou at 1800-3800 meters. In Burundi, Rwanda, and Uganda, 70% of the potential for Willard’s Sooty Boubou lies outside of protected areas and has been converted to agriculture, and the numbers for the Democratic Republic of Congo are only slightly better.

Willard’s Sooty Boubou joins several other imperiled bird species that depend on the region’s mid-elevation forests, which have been largely overlooked by conservation efforts. “The Albertine Rift is a crossroads of amazing biodiversity, dramatic and diverse landscapes, and heartbreaking social and political unrest. It goes from glaciers to volcanoes to plateaus to lakes, with a succession of vegetation types from high-elevation cloud forests to lowland tropical forests,” says Berzaghi. “It is home to gorillas and forest elephants as well as a high number of endemic animal and plant species. Unfortunately, much of the region has gone through never-ending conflicts, with very negative consequences for both humans and biodiversity, and conservation involving local populations is paramount.”

“This paper provides additional data in support of the recognition of Willard’s Sooty Boubou as a species distinct from Mountain Sooty Boubou. Clarification of the niche that Willard’s Sooty Boubou occupies, that of mid-elevation forests, distinct from the higher-elevation Mountain Sooty Bouboy, is important, because these habitats are among the most heavily impacted in Africa from agriculture,” according to UC Berkeley’s Rauri Bowie, an expert on African birds who was not involved in the study. “Conservation agencies have an opportunity to move beyond taxonomic debate and use the models derived from this species to improve conservation outcomes for not only this species, but also a broad set of mid-elevation Albertine Rift endemic vertebrates through protection of mid-elevation forests that have received relatively little protection in comparison to high-elevation montane habitats.”