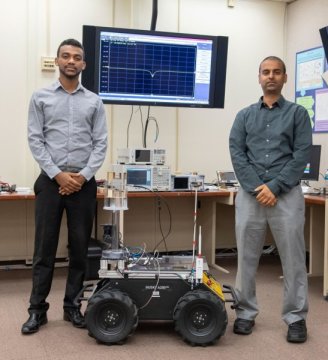 Scientists at the U.S. Army Research Laboratory have developed a novel algorithm that enables localization of humans and robots in areas where GPS is unavailable.

According to ARL researchers Gunjan Verma and Dr. Fikadu Dagefu, the Army needs to be able to localize agents operating in physically complex, unknown and infrastructure-poor environments.

“This capability is critical to help find dismounted Soldiers and for humans and robotic agents to team together effectively,” Verma said. “In most civilian applications, solutions such as GPS work well for this task, and help us, for example, navigate to a destination via our car.”

However, noted the researchers, such solutions are not suitable for the military environment.

“For example, an adversary may destroy the infrastructure (e.g., satellites) needed for GPS; alternatively, complex environments (e.g., inside a building) are hard for the GPS signal to penetrate,” Dagefu said. “This is because complex and cluttered environments impede the straight-line propagation of wireless signals.”

Dagefu said that obstacles inside the building, especially when their size is much larger than the wavelength of the wireless signal, weaken the power of the signal (attenuation) and re-direct its flow (called multipath), making a wireless signal very unreliable for communicating information about location.

According to the researchers, typical approaches to localization, which use a wireless signal’s power or delay (i.e., how long it takes to reach a target from a source), work well in outdoor scenes with minimal obstacles; however, they perform poorly in obstacle-rich scenes.

The team of ARL scientists including Dagefu and Verma developed a novel technique for determining the direction of arrival, or DoA, of a radio frequency signal source, which is a fundamental enabler of localization.

“The proposed technique is robust to multiple scattering effects, unlike existing methods such as those that rely on the phase or time of arrival of the signal to estimate the DoA,” Verma said. “This means even in the presence of occluders that scatter the signal in different directions before it is received by the receiver, the proposed approach can accurately estimate the direction of the source.”

The underlying idea is that the gradient of the spatially sampled received signal strength, or RSS, carries information about the source direction.

“Extracting the DoA requires a theoretically grounded analysis to obtain a robust estimator in the presence of undesirable propagation phenomena,” Verma said. “For example, large obstacles cause the RSS samples nearby to become highly correlated (so-called “correlated shadowing”). If left uncorrected, this correlation can seriously bias the DoA estimate.”

The key invention according to the researchers is an algorithm that statistically models the RSS gradient and controls for spatial outliers and correlations.

Importantly, when the signal is extremely noisy, the estimator correctly outputs that no DoA is present, rather than incorrectly estimating an arbitrary direction.

The output is an estimated DoA and associated uncertainty.

The researchers have validated the approach with several publically available as well as in-house collected measurement datasets at 40MHz and 2.4GHz bands, as well as data from high fidelity simulations.

The technique works in conditions of heavy multipath in which classical phase or time of arrival based estimates would fail.

In addition to not requiring any fixed infrastructure, the proposed technique also does not rely on any prior training data, knowledge about the environment, multiple antennas, or prior calibration between nodes.