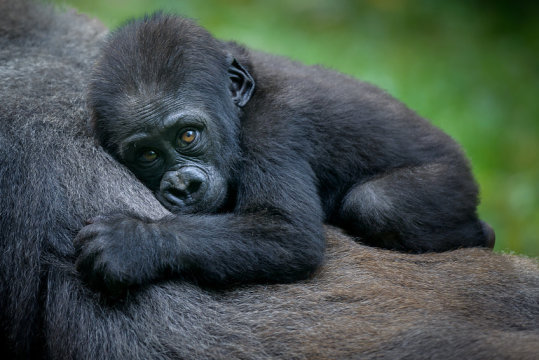 Males have greater reproductive success if they spend more time taking care of kids — and not necessarily only their own, according to new research published by anthropologists at Northwestern University.

In a previous study, the researchers found that wild male mountain gorillas living in Rwanda do something that is quite unusual for a mammal — they help take care of all of the kids that live in their social group, regardless of whether they are the father. The goal of the new study was to figure out why.

“Mountain gorillas and humans are the only great apes in which males regularly develop strong social bonds with kids, so learning about what mountain gorillas do and why helps us understand how human males may have started down the path to our more involved form of fatherhood,” said Stacy Rosenbaum, lead author of the study and a post-doctoral fellow in anthropology at Northwestern.

Christopher Kuzawa, a co-author of the study, said the findings run counter to how we typically think of male mountain gorillas — huge, competitive and with reproduction in the group dominated by a single alpha male.

“Males are spending a lot of time with groups of kids — and those who groom and rest more with them end up having more reproductive opportunities,” said Kuzawa, professor of anthropology at Northwestern and a faculty fellow at the University’s Institute for Policy Research. “One likely interpretation is that females are choosing to mate with males based upon these interactions.”

Added Rosenbaum: “We’ve known for a long time that male mountain gorillas compete with one another to gain access to females and mating opportunities, but these new data suggest that they may have a more diverse strategy. Even after multiple controls for dominance ranks, age and the number of reproductive chances they get, males who have these bonds with kids are much more successful.”

This research suggests an alternative route by which fathering behaviors might have evolved in our own species, Rosenbaum said.

“We traditionally have believed that male caretaking is reliant on a specific social structure, monogamy, because it helps ensure that males are taking care of their own kids. Our data suggest that there is an alternative pathway by which evolution can generate this behavior, even when males may not know who their offspring are,” Rosenbaum said.

This raises the possibility that similar behaviors could have been important in the initial establishment of fathering behaviors in distant human ancestors.

The researchers are currently investigating whether hormones might play a role in helping facilitate these male behaviors, as they do in humans. Seminal work on the hormonal changes that men experience as they become fathers and care for kids has been conducted in the anthropology department at Northwestern.

“In human males, testosterone declines as men become fathers, and this is believed to help focus their attention on the needs of the newborn,” said Kuzawa, who co-authored a study on this topic in the journal Proceedings of the National Academy of Sciences in 2011. “Might gorillas that are particularly engaged in infant interaction experience similar declines in testosterone? Because this would probably impede their ability to compete with other males, evidence that testosterone goes down would be a clear indication that they must be gaining some real benefit — such as attracting mates. Alternatively, if it does not go down, this suggests that high testosterone and caretaking behavior don’t have to be mutually exclusive in mountain gorillas.”

The researchers look forward to exploring these new questions. “We’re working on characterizing these males’ hormone profiles across time, to see if events such as the birth of new infants might be related to their testosterone levels,” Rosenbaum said. “We’re fortunate to have data that span many years of their lives.”

“Dian Fossey first went to study these mountain gorillas in the 1960s hoping to further our understanding of human evolution,” Stoinski said. “More than 50 years later, the continued research on this population is still providing insights, not only on a critically endangered species, but also into what it means to be human.”