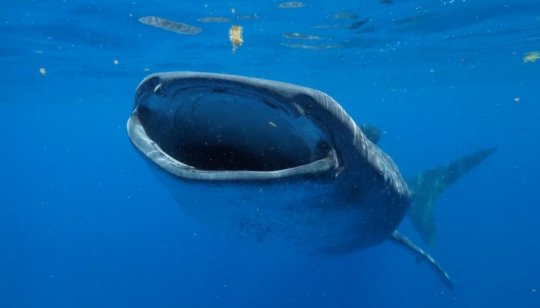 Already the world’s largest shark species, male whale sharks can swim around the ocean for up to 130 years, according to a recently published study by scientists at Nova Southeastern University’s (NSU) Guy Harvey Research Institute (GHRI) and collaborators from the Maldives Whale Shark Research Programme.

The research on whale shark aging growth dynamics, published in the Marine and Freshwater Research Journal, was conducted in the Republic of Maldives using a unique approach.

According to Cameron Perry, the first author of the scientific paper, and at the time a graduate student at NSU’s GHRI, “What makes this a novel approach is that we took repeated noninvasive underwater measurements of live sharks over the course of a decade.

“Up to now, such aging and growth research has required obtaining vertebrae from dead whale sharks and counting growth rings, analogous to counting tree rings, to determine age. Our work shows that we can obtain age and growth information without relying on dead sharks captured in fisheries. That is a big deal.”

According to the research study, “Comparing length-measurement methods and estimating growth parameters of free-swimming whale sharks (Rhincodon typus) near the South Ari Atoll, Maldives,” taking repeated measurement of the same sharks over many years was possible because many of these sharks came back to the same place every one to two years, and individuals could be recognized by their unique spot patterns. The researchers then modeled their measurement results and found that:

“Growth and reproduction of whale sharks, which are endangered in many places, are poorly understood,” said Mahmood Shivji, Ph.D., director of NSU’s GHRI. “When you couple this lack of knowledge with the fact that whale shark products such as fins, meat and oil are highly valuable — they are harvested in many countries — one can quickly see the urgency in learning as much as possible in order to help save these majestic creatures.”

“The more we learn about these animals, their growth dynamics, where they go, what areas may be their nurseries, it can lead to a better understanding of their life history, which is imperative to guide conservation efforts,” he said.

Materials provided by Nova Southeastern University. Note: Content may be edited for style and length.