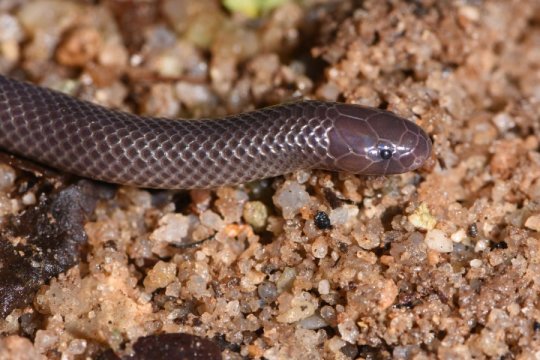 Following a series of recent surveys in north-western Liberia and south-eastern Guinea, an international team of researchers found three stiletto snakes which were later identified as a species previously unknown to science.

The discovery, published in the open-access journal Zoosystematics and Evolution by the team of Dr Mark-Oliver Roedel from the Natural History Museum, Berlin, provides further evidence for the status of the western part of the Upper Guinea forest zone as a center of rich and endemic biodiversity.

Curiously, stiletto snakes have unusual skulls and venom delivery system, allowing them to attack and stab sideways with a fang sticking out of the corner of their mouths. While most of these burrowing snakes are not venomous enough to kill a human — even though some are able to inflict serious tissue necrosis — this behaviour makes them impossible to handle using the standard approach of holding them with fingers behind the head. In fact, they can even stab with their mouths closed.

The new species lives in primary rainforest and rainforest edges in the western part of the Upper Guinea forests. Branch’s Stiletto Snake is most likely endemic to this area, a threatened biogeographic region already known for its unique and diverse fauna.

The first specimen of the new species was collected at night from a steep bank of a small rocky creek in a lowland evergreen rainforest in Liberia. Upon picking it up, the snake tried to hide its head under body loops, bending it at an almost right angle, so that its fangs were partly visible on the sides. Then, it repeatedly stroke. It is also reported to have jumped distances almost as long as its entire body. The other two specimens used for the description of the species were collected from banana, manioc and coffee plantations in south-eastern Guinea, about 27 km apart.

“The discovery of a new and presumably endemic species of fossorial snake from the western Upper Guinea forests thus is not very surprising,” conclude the researchers. “However, further surveys are needed to resolve the range of the new snake species, and to gather more information about its ecological needs and biological properties.”

Pensoft Publishers. The original story is licensed under a Creative Commons License. .