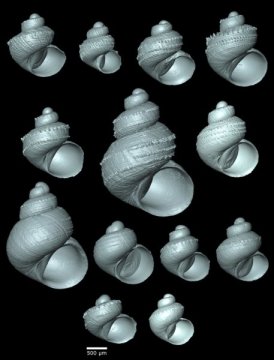 Thanks to their conspicuous structures, the mollusks have been added to a brand new species group of land snails to be commonly known as the ‘scaly’ snails, so that they can be set apart from the rest in the genus Georissa. Why it is that only some of the species in the genus sport the unique ‘scales’, remains unknown.

Fascinated with the minute ‘scaly’ snail fauna of Borneo, the researchers carried out fieldwork between 2015 and 2017 to find out how these curious shells evolved. In addition, they also examined material deposited in museum and private snail collections.

Apart from DNA data, which is nowadays commonly used in species identification, the team turned to yet-to-become-popular modern tools such as 3D modelling, conducted through X-ray scanning. By doing so, the researchers managed to look at both the inner and outer surfaces of the shells of the tiny specimens from every angle and position, and examine them in great detail.

The researchers note that to identify the ‘scaly’ snails to species level, one needs a combination of both DNA and morphological data:

“Objective species delimitation based solely on molecular data will not be successful for the ‘scaly’ snails in Georissa, at least if one wishes for the taxonomy to reflect morphology as well.”

The six new species are all named after the localities they have been originally collected from, in order to create awareness for species and habitat conservation.