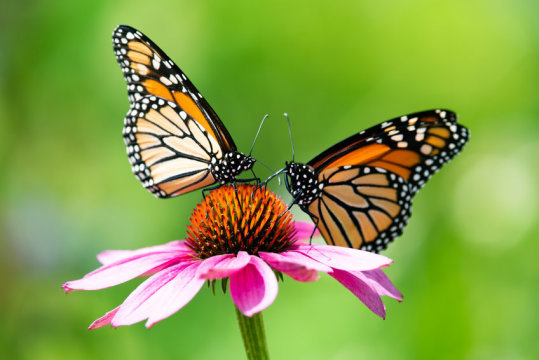 Arguably, one of the world’s most famous insects, the monarch butterfly, is currently experiencing dire problems with its migration in eastern North America. Fewer and fewer monarchs are successfully reaching their overwintering destinations, and scientists aren’t sure why. Because of this, the need for research on the migration has never been more urgent. New research published in De Gruyter’s Open Access journal Animal Migration, aims to help with this effort.

The dwindling numbers of overwintering monarchs in the mountains of central Mexico have been the subject of debate among researchers, with some arguing it reflects a large-scale drop in numbers of breeding adults, while others point to increasingly perilous migration as the cause. Now, a new research study “Alternate migration strategies of eastern monarch butterflies revealed by stable isotopes” led by Dr. Hannah Vander Zanden, from the University of Florida, throws another potential explanation into the mix — maybe the monarchs are simply travelling elsewhere to overwinter, like to the balmy coast of southern Florida.

Dr. Vander Zanden and her team captured and examined monarchs that wintered in South Florida, using a special analytical technique that can pinpoint where the monarchs came from based on a sample of their wing or body tissue. Amazingly, they discovered that half of the monarchs sampled appeared to originate from the American Midwest, which is typically thought to represent the core breeding range of the eastern population. For years, researchers assumed that monarchs from this region only travel to the mountainous region of Mexico each fall. But, this new discovery means that at least some of the Midwestern monarchs are choosing not to fly to Mexico after all, and instead they appear to fly in nearly the opposite direction until they reach southern Florida.

“Previous research had suggested that some migrating monarchs may wind up in southern Florida if they become waylaid by strong westerly winds, but this evidence makes it seem like they purposely travelled to this location,” says Andy Davis, noted expert in monarch migration from University of Georgia and editor of the journal. This discovery could bear on the issue of the shrinking overwintering population in Mexico, especially if more of these “alternative” overwintering locations are found.

This research was recently published along with four other studies that focused on monarch migration, in a themed collection in the journal. “Collectively, these studies demonstrate that we still have so much to learn about this phase of the monarch life cycle in North America. And, given the issues facing the migration itself, this work couldn’t come at a better time,” said Davis.

Materials provided by De Gruyter. Note: Content may be edited for style and length.