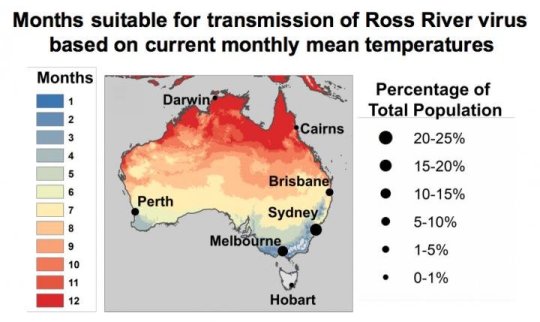 Scientists have built a model that predicts how temperature affects the spread of Ross River virus, a common mosquito-borne virus in Australia, according to a report in the journal eLife.

The research demonstrates the importance of using temperature to predict epidemics of mosquito-borne diseases and could help public health bodies prepare for the impact of climate change on the spread of tropical diseases worldwide.

“Scientists are realising that warmer temperatures mean longer mosquito seasons and mosquitoes entering new regions where it was previously too cold for them to survive,” says senior author Erin Mordecai, Assistant Professor in Biology at Stanford University’s School of Humanities and Sciences, US. “Warm temperatures also speed up the biological processes that help mosquitoes spread viruses. But working out the precise effect of temperature on different stages of mosquito growth and spread of viruses is tricky, because so many factors are involved.”

Australia and the Ross River virus (RRV) offer an ideal opportunity to study the effects of temperature on disease transmission. RRV infects between 2,000-9,000 people each year in Australia and causes long-term joint pain and disability. Most people live in cities ranging in latitude from the north to the south of the country. Each season, as the temperature rises, RRV epidemics move from the subtropical north to temperate south.

The team used two species of mosquito most responsible for RRV outbreaks in Australia to build a model using laboratory data on traits such as mosquito growth, survival, bite rate and infectiousness in response to different temperatures. “Our model correctly predicted that RRV is endemic across tropical Northern Australia year-round, and is seasonally epidemic in the cooler regions of Southern Australia,” explains Sadie Ryan, Associate Professor of Medical Geography at the University of Florida, US, and second author of the study. “When human population data was added into the model, its prediction of seasonal patterns matched recorded human cases of RRV.”

The model determined that the optimal temperature for RRV spread was 26°C (80°F) and transmission would be limited at temperatures below 17°C (63°F) and above 32°C (89°F), which matches current patterns of disease. Mosquito lifespan was the most important temperature-dependent factor limiting transmission, and fertility and survival were prohibiting factors at temperatures that were too low or high for transmission. As transmission is limited by temperatures that are too cold and too hot, it may increase in some locations as a result of climate warming, while decreasing in others.

“Our study provides strong evidence that temperature drives infection patterns at the continent-wide and seasonal levels,” says first author Marta Shocket, Postdoctoral Scientist in Stanford’s Biology Department. “In the short term, our work will help researchers build better statistical models for RRV which can be used to make more specific predictions based on climate change. In the long term, it should help mosquito control agencies better plan for the future and may provide further evidence of the need to combat climate change.”