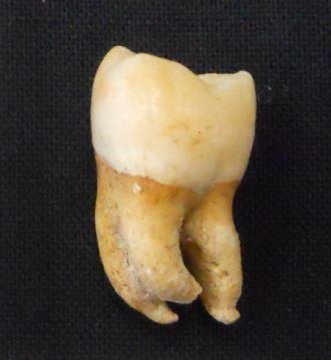 A team led by UC Davis researchers have come up with a new way to estimate the biological sex of human skeletal remains based on protein traces from teeth.

Estimating the sex of human remains is important for archaeologists who want to understand ancient societies and peoples. Researchers can measure features of bones that differ between males and females, usually the pelvis. But skeletons of children and adolescents don’t show these structural changes, and often sites may only yield a few pieces of bone.

DNA analysis is relatively expensive and DNA is quite fragile compared to other molecules, said UC Davis anthropologist Jelmer Eerkens.

Teeth, on the other hand, preserve well and are often found in archaeological sites.

A tooth can tell us a lot about the person to whom it belonged, Eerkens said.

Amelogenin proteins play a role in the formation of tooth enamel. The genes for amelogenins happen to be located on the X and Y chromosomes that determine biological sex in humans, although amelogenin has nothing to do with this. Forensic DNA analyses for sex often depend on looking for the amelogenin X or Y genes.

Females will have amelogenin-X in their teeth; males should have both the X and Y versions of the protein.

Yip looked at 40 enamel samples from 25 individuals including both adult teeth and “milk teeth” from children. The ages of the teeth varied from 100 to 7,300 years before present, collected from archaeological sites in North America and Peru. She also looked at samples from modern teeth.

Yip was able to find traces of amelogenin-X in all the samples and amelogenin-Y in about half of them.

The new method adds another piece to the information archaeologists can learn from a single tooth, Eerkens said.

“Like DNA our method is quantitative and does not depend on anatomical training, it is cheaper to run per sample (than DNA) and can be done in non-sterile conditions,” Parker said. The method would likely be used alongside existing techniques, he said.